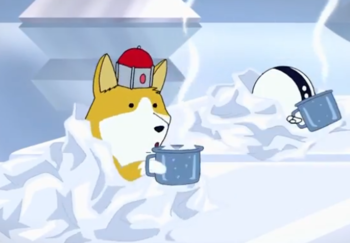 "Perhaps warm milk? Warm milk with honey to soothe the throat."
— The Chef, Little Princess, "I Want My Voice Back"
Advertisement:

Oh no! Somebody's unwell! Or maybe they're injured or have strained their throat. What do you do? Well according to this trope, you offer them a hot drink.

Usually it's tea, especially herbal tea. Occasionally it's warm milk, although that's more commonly associated with helping people go to sleep. It's also often boiled honey and lemon water if the character has any disease with a sore throat as a symptom, because honey really does help soothe sore throats, and lemons contain nutrients that can help the immune system. It may also be heated alcohol. On rare occasions, it's hot chocolate (which is more associated with warming up and/or having fun), and it's hardly ever coffee.

The character offering the hot drink is often very amicable and nurturing and could be the Team Mom. They might also be a Nature Lover and/or an expert on plants or nature in general if the drink is made of natural ingredients (which it often is). The drink might also be an old family recipe.

The drink itself usually tastes either very good or very bad, and it is not a Healing Potion but rather a normal drink, although sometimes healing potions might be poured into these drinks (sometimes overlapping with Slipping a Mickey), invoking a practical version of the trope. Sometimes zigzagged with the Catch Your Death of Cold trope, where it's hard to tell if the hot drink is to warm them up or to treat the cold or both. Hot drinks that are explicitly to warm people up don't count unless the person has full-blown hypothermia. Neither do cases where the character is just unhappy or tired.

There is a grain of truth to this trope: if somebody has a minor illness, such as a cold, having a hot drink might help them stay hydrated and satisfy any chills they might have; the warm vapor from the drink might also loosen nasal congestion. However, it won't actually get rid of the disease, and if someone is seriously ill or injured, it's best to get a doctor. And of course, it's even more justified in the hypothermia instances as hypothermia outright comes from being cold, but simply warming the person up with no medical attention only works in mild cases and in severe cases, you should really let a doctor take over as warming them up too quickly could send them into shock, which could even kill them.

Compare Foot Bath Treatment, Soup Is Medicine, and Illness Blanket for other medical idiosyncrasies. Can overlap with Brits Love Tea if it's associated with Britain and tea. See also Healing Herb, which could be an ingredient. May overlap with That Old-Time Prescription. If the drink is a Magic Antidote (i.e. it works instantly) but it's supposed to be a normal drink, it's overlapping with Hyperactive Metabolism. Sometimes overlaps with New Technology is Evil if the drink is said to be better than regular medicine. Compare Calming Tea for when the drink is used to help deal with psychological rather than physical problems. See also I Need a Freaking Drink when a character turns to a harder beverage for comfort.

Grumpy has had a bad day.

Grumpy has had a bad day.