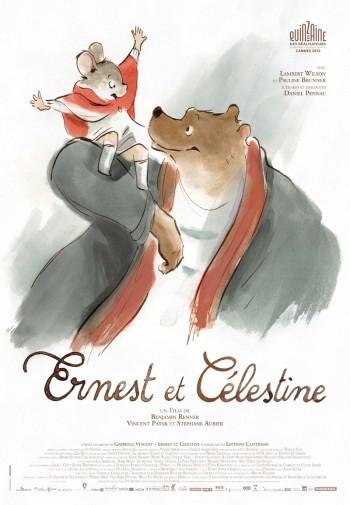 Ernest et Célestine (English: Ernest & Celestine) is a 2012 hand-drawn animated French film, based on a popular series of children's books by Belgian author Gabrielle Vincent. The film focuses on the adventures of a young female mouse named Celestine and the male bear Ernest, who become unlikely friends. It was the first animated feature to be created entirely with "paperless traditional," or "tradigital," using Adobe Flash and graphics tablets to create hand-drawn animation on computers.note The Simpsons Movie also used the technique, but only for a few shots late in production.

The film was nominated for an Academy Award for Best Animated Feature film and also won a number of major film festival awards, including the Magritte Awards in three categories and the Dubai International Film Festival. The film's DVD release includes a fairly extensive making-of documentary covering everything from initial development to sound production. The English language dub is notable for featuring the final performance of Lauren Bacall (as the voice of the Grey One).

And no, this is not one of the Ernest movies.