Too Spicy for Yog-Sothoth 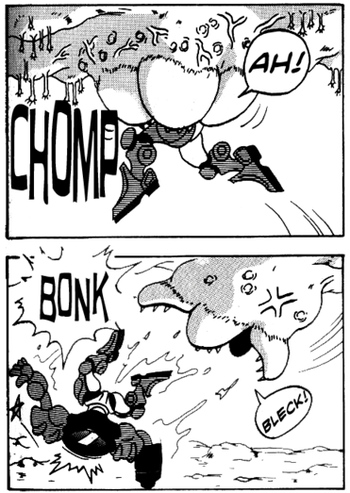 Featuring the Denatonium Benzoate Suit, to repel all would-be Samus Eaters.
"They didn't want me."
— Billy after being rejected by Yog himself, The Grim Adventures of Billy & Mandy
Advertisement:

Well, it looks like this is The End. The Eldritch Abomination rears up on its ugly, misshapen limbs, and devours The Hero face first. The audience does a collective cringe since, as everyone knows, watching someone getting eaten alive is not a particularly pretty sight. Audiences prepare for the sickening crunch as the monster...

Yes, that's right. It looks like the monster doesn't want to eat the lovable hero. It seems that something about them, be it their whiny, unlikable personality, their lack of any skills for the villain to absorb, or even their really bad taste in deodorant or shampoo is enough that a monster simply does not want to eat them. Now, strictly speaking, is this being picky? Well, yeah — but it's not like you'd put just anything in your mouth, so why should a human-eating monster be any different? Just because they're a monster doesn't mean they're a savage!

Note that, broadly speaking, this trope does not just concern itself with eating. A monster could also just plain be unwilling to dignify an unworthy subject with the honor of being killed. One particularly creepy variant is that the Eldritch Abomination or similar evil devours, grabs, attacks, or just confronts the character... and is immediately terrified and runs, sometimes screaming, back to whence they came. This is usually played for laughs, but sometimes it implies that this character, or perhaps humanity as a whole, is in fact worse than any Cthulhu-esque abominations or reality-warping homicidal lunatics could ever be. This can also include an Emotion Eater being overloaded by the emotions of its victim, such as a monster who eats rage being overloaded by the hero's Unstoppable Rage.

Kill It Through Its Stomach is the more extreme version of this trope being taken literally. If the "victim" is more dangerous/powerful than the monster, that's a case of Mugging the Monster. Pity the Kidnapper is the broader, typically more mundane trapping of this trope. Might overlap with Barred from the Afterlife (if not even hell will accept an especially wicked character) and Kicked Out of Heaven, Disability Immunity, Insanity Immunity, and/or Assimilation Backfire. See also Eaten Alive and Getting Eaten Is Harmless. Compare and contrast Why Isn't It Attacking?.