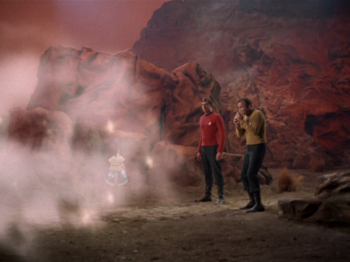 It's just another day of exploration for Kirk and company. There's a planet called Argus X to be explored, a new mineral is discovered, a mysterious cloud is killing Redshirts. (The Redshirt body count for this entire episode is six, including one off screen.) The victims of the mysterious cloud of smoke are sucked dry of all blood, but with no visible cuts or punctures. Kirk remembers an incident like this from 11 years ago when he was just a Lieutenant on his first tour of duty. The guilt of the memory starts to affect Kirk. If he had just fired his phaser a little more quickly all those years ago, Captain Garrovick, half his crew and now these crew members wouldn't be dead.

Can Kirk take down this blood thirsty monster without becoming a monster himself?