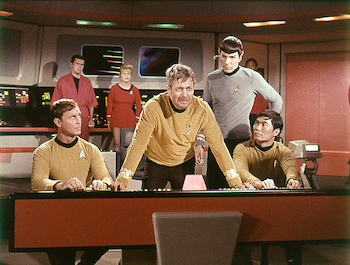 A vengeful, PTSD-ridden Commodore Decker takes over the Enterprise.
Decker: They say there's no devil, Jim. But there is a... Right out of hell, I saw it!!!
Kirk: Matt. Where's your crew?
Decker: On the third planet.
Kirk: There is no third planet!
Decker: Don't you think I know that?!? There was! But not anymore! They called me, they begged me for help! Four hundred of them! I couldn't!! I... I couldn't... [breaks into sobs]
Advertisement:

The Enterprise is investigating the destruction of several planetary systems when they come across a crippled starship, the U.S.S Constellation. The only person on board is Commodore Matthew Decker, the ship's captain. Through the disturbed captain's rantings and the pre-recorded Captain's Log, Kirk and co. deduce that after the ship was severely damaged, the entire crew was beamed down to a local planet, the captain taking the duty of going down with the ship after seeing to his crew's safety. However, a planet-destroying weapon constructed long ago by a long-dead race destroyed the very planet where the captain thought his crew would be safe, leaving him alive and grieving. While Kirk, Scotty and a small repair crew stay on board the Constellation, Decker is beamed back with McCoy.

Decker isn't taking Survivor Guilt very well and takes command of the Enterprise upon learning that Spock would rather take logical steps than press forward and destroy the planet killer at all costs. Decker recklessly endangers the crew in his attempts to destroy the thing that killed his own crew. When Kirk finds out about this, he is not amused to say the least. He orders Spock to relieve Decker, but the commodore is only finally removed when Spock threatens to arrest him. Spock sends him to sick bay, but instead of going there he attacks his guard and steals a shuttlecraft, intending to shove it down the machine's gullet — with himself inside.

No one is able to save Decker. He doesn't want to be saved. However, Kirk believes he had the right idea to destroy the device. They just need to use something bigger than a shuttlecraft. Hmmm...this junked up starship that no one's using just might do....