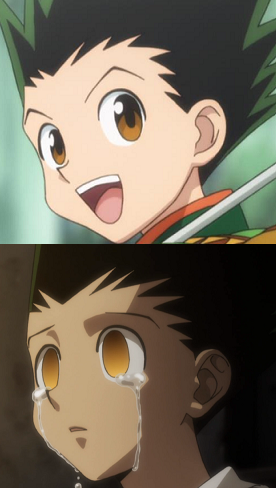 Top: Normal mood.
Bottom: Oh no...
"Bright eyes, burning like fire.
Bright eyes, how can you close and fail?
How can the light that burned so brightly
Suddenly burn so pale?"
— Art Garfunkel, "Bright Eyes"
Advertisement:

Normally, happy people's eyes shine and reflect their environment. This is because the coating of tears over the exposed eye to keep it from drying out reflects light sources within a certain distance.

In anime and manga, though, when a character is feeling sad, very tired, depressed, or about to snap, their eyes lose all the natural shine and have the appearance of being lifeless. Depending on the art style, this can range from merely a lack of highlights to the iris turning into a flat disc of the afflicted's base color. May or may not be accompanied by tired lines in the face. This trope is never a good sign.

Often goes hand-in-hand with the Heroic BSoD, and can betray a Stepford Smiler to the audience, although none of the characters in-story seem to notice the eye problem.

This can be Truth in Television, because sad, shocked, or tired people tend to slightly lower their head, which causes the upper part of the eyes, which is normally reflecting the light, to be concealed. When the person recovers naturally or when dealing with a recent trauma, this is a case of the Thousand-Yard Stare; Dull Eyes of Unhappiness are a chronic problem that do not show noticeable improvement over time.