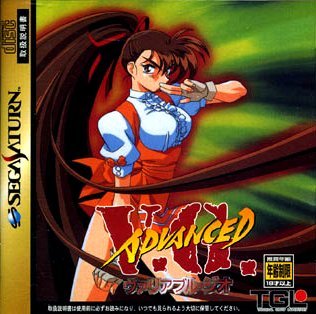 Advanced Variable Geo (or Advanced V.G. as officially shortened) is a duology of console Fighting Games by the company Giga (later known for their Baldr series of Visual Novels). The general premise, where in the future a grand championship tournament called Variable Geo is held annually to determine who is the strongest waitress in the world, derives from a series of H-Games. This page is for the Bleached Underpants console games only.

Advanced V.G. II, which released for the PlayStation in 1998, focused on a new character: Tamao Mitsurugi, a fan of Yuka, who wanted to become just like her. She befriended many of Yuka's old rivals, but eventually learned that her hero had lost the will to fight, since K-1 and K-2 were killed by Miranda for failing to defeat her in the previous tournament. After re-igniting Yuka's fighting spirit and overcoming Miranda's Psycho for Hire, Saki Shinjou, Tamao and Yuka were pitted against Miranda's latest Gattaca Babies, the Material twins, after which Tamao defeated Miranda, herself. The saga concluded with the waitresses coming together to prevent Miranda's escape, by unleashing a Combined Energy Attack which killed her.

The plot of these games was later loosely adapted for the Variable Geo OVA.