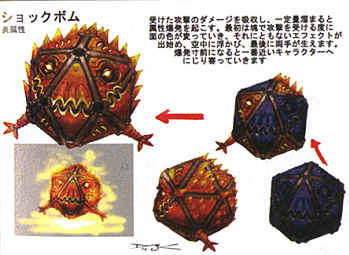 "Bring me the head of every monster you slay", they said...
"My angles are many.
My sides are not few.
I'm the Dodecahedron.
Who are you?"
— The Dodecahedron, The Phantom Tollbooth
Advertisement:

Some creatures have a very simple shape: just a polygon or a polyhedron, such as a cube or a cone, mathematically perfect and featureless except possibly for small legs, eyes, etc.

As perfect geometric shapes can be unnerving, such beings often feel truly alien. Their perfect shape often implies that they're cold, mechanical and emotionless. That said, sometimes their appearance is simply a result of the artists being lazy.

Sometimes they may be Silicon-Based Life, while other times, they're constructed of Hard Light. Not to be mistaken with a Companion Cube (though some polyhedron-shaped Companion Cubes might be treated as if they were alive), or a Random Number God. It's not uncommon for amateur video games to feature a square or a triangle as the protagonist (and sometimes explicitly have a title along the lines of Triangle Adventures, etc.), since such heroes are very easy to draw and animate (if they're indeed animated at all).