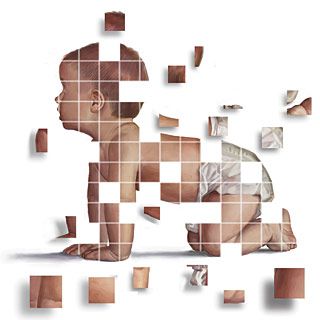 "Some assembly required."
"Nothing ever changes, except man. Your technical accomplishments? Improve a mechanical device and you may double productivity, but improve man and you gain a thousandfold. I am such a man. "
— Khan Noonien Singh, Star Trek: The Original Series, "Space Seed"
Advertisement:

One of the biggest downfalls of LEGO Genetics is the fact that it's hard to modify an adult. They're already done with development and cell specialization and the idea seems a bit far fetched to most people. It's like putting flour on a cake after it's been baked.

If you modify humans before they're born, however, then it's far more plausible, because fetuses are mostly stem cells that can be modified into any cell. Designer Babies are what occurs when you create, or genetically engineer embryos and then implant them into a womb (either the original mother's or, especially in the case of completely artificial genomes, a host mother's) or a Uterine Replicator.

The resulting child is often seen either as a more perfect, beautiful and wonderful Transhuman than normal people, or as a freak/monstrous Uncanny Valley who should have never existed and must now be destroyed — and sometimes both at the same time by different groups of people. This is often a source of superpowers. It's also frequently the purview of the Evilutionary Biologist, who believes that humanity can be "improved" if they would only allow him to tinker with nature a bit. What Could Possibly Go Wrong?

It is not uncommon to have settings, especially in Science Fiction of the Dystopian variety, in which most or all humans are produced via genetic engineering/cloning, sometimes forced into physical and mental specializations similar to a Hive Caste System. This is often done in an effort to "perfect" humanity in a belief that nature is stronger than nurture. Parallels with Nazi Eugenics are likely. In almost all of these settings, there will be a group of people who want to make babies the "natural" way. Whether they're right depends on which side of Science Is Bad the Aesop of the work falls on.