One Drink Will Kill the Baby 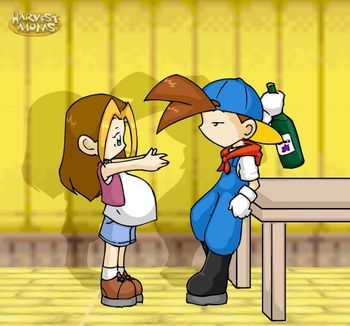 She's had to put up with nine months of this.
Image

. Used with permission.
"Government Warning: According to the Surgeon General, women should not drink alcohol during pregnancy because of the risk of birth defects."
— Warning label found on all alcoholic beverages in the United States
Advertisement:

, the irreversible brain damage and physical deformities that result from prenatal exposure to alcohol. No amount of alcohol is known to be safe for a developing baby and this will likely forever remain a mystery, as scientists can't ethically ask hundreds of expecting mothers to go on a bender and see what happens. The only thing certain is that "none" is definitely less than whatever the safe amount is, if a safe amount exists at all. This leads many women to play it safe and swear off the booze entirely as soon as she misses her period, or even when she decides to actively start trying for a baby.

Fair enough, but many TV shows take this to ridiculous lengths. Comedy series especially hang entire scenes on the pregnant woman desperately avoiding taking even a single sip of the wine offered, as if even a single drop of alcohol will irreparably harm the helpless little fetus. Conversely, the second a person serving drinks learns that the woman getting one is pregnant will be the one where you see the server stopping the pouring faster than you can imagine.

Somehow it's always in a situation where not drinking alcohol would be suspicious or unacceptable. The woman is convinced that ordering a Pepsi at the bar (when she hadn't been averse to alcohol before) will cause everyone to shout, "AHA! You're pregnant!" when it's supposed to be a secret — and sometimes that is exactly how the pregnancy becomes known. This requires huge leaps of logic from the other people, instead of assuming the woman simply doesn't want to drink or is the Designated Driver for the evening.

Even more ridiculous situations tend to arise when a character is Mistaken for Pregnant and the other characters desperately try to stop her from drinking without revealing that they "know". Compare Childhood Brain Damage, which usually occurs only once the kid is actually born.

An example of Truth in Television. A survey of U.S. bar workers confirms that most would refuse point blank to serve an alcoholic drink to a visibly pregnant woman.