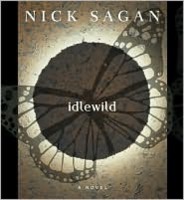 A man awakens alone in a swamp. His body is paralyzed and his memory has been wiped, but he knows the following: Someone tried to kill me. Lazarus is dead. I killed him.

Working from amnesiac roots, he must investigate his environment, meet old friends and enemies, and unravel the mystery at the heart of Idlewild.

Idlewild is a 2003 science fiction book by Nick Sagan. It is characterized by dark atmosphere, a grim sense of humor, and repeated plot and character twists that can drag the audience through an emotional wringer. As such, almost all of the information below is a spoiler to one extent or another. Read accordingly.

Not to be confused with the 2006 film of the same name or the 1995 novel of the same name by Mark Lawson or the Scottish rock band Idlewild (who took the name from a location in Anne of Green Gables).

It was followed by two sequels: Edenborn and Everfree.