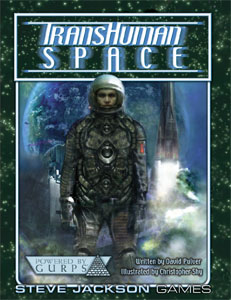 The Main Book Cover. See the note on Art-Style Dissonance.
"In the last decade of the 21st century, humanity faced two of its greatest challenges. The first was the transformation from a single, evolved species to a multitude of artificial races. The second was the settlement of the vast reaches of the solar system. Away from the prying eyes of Earth, space-going transnationals developed technologies that governments feared to investigate but could not ignore, while bizarre posthuman cultures bloomed like exotic flowers. It was a time of wealth and adventure, of transformation and terror. It was the age of Transhuman Space."
— From the Introduction to Transhuman Space
Advertisement:

Transhuman Space is a Hard Science Fiction role-playing game setting for GURPS, published by Steve Jackson Games. It features a lot of advanced biotech, "wet" (biologically-based) nanotech, the colonisation of the Solar System (including the terraforming of Mars), human personalities uploaded to computers, advanced artificial intelligence, and a politically multi-polar world.

This RPG setting provides examples of: