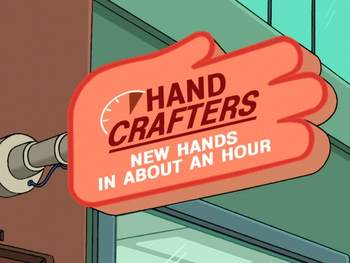 So, you're missing some limb or organ and are worried about tissue rejection. Don't worry, the doctor can just grow you a new one in this vat here. Oh, and there's no ethical issues to worry about, it's not like this cloned part has a brain, it's just an arm or leg or liver.

Depending on the setting, this may be more, or less expensive than (equally functional) Artificial Limbs, but it is almost always more culturally acceptable.

Some scientists are working on this in Real Life due to the scarcity of transplantable organs and the problem of immune reactions to transplants. Chimeric organs that could be suitable for transplant have been grown in pigs and sheep while bladders and tracheas have been produced in labs.

Walking Transplant is this trope taken to the extreme, where an entire person is created solely for the purpose of harvesting their organs for another.