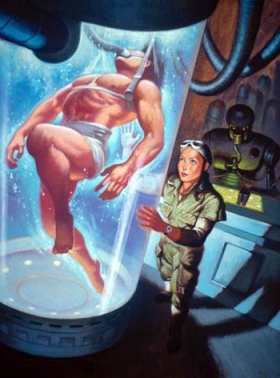 In many science fiction works, people can recover from practically any injury after being immersed in a tank full of some kind of liquid Applied Phlebotinum that makes them heal with shocking speed. People in them tend to be naked or barely clothed, to show how badly they're wounded and to absorb all the healing juices.

Subtrope of both Auto Doc and People Jars. Related to Panacea, Healing Spring, Healing Potion, and Heal It with Water. May involve Nanomachines. Compare Saved by the Phlebotinum.