Kick Them While They Are Down 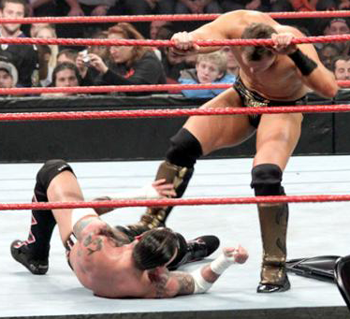 Exemplary sportsmanship, gentlemen!
Ender knew the unspoken rules of manly warfare, even though he was only six. It was forbidden to strike the opponent who lay helpless on the ground; only an animal would do that. So Ender walked to Stilson's supine body and kicked him again, viciously, in the ribs.
— Ender's Game
Advertisement:

There's a fine line between Unsportsmanlike Gloating and being just plain nasty. No one is supposed to kick, stab, beat, or otherwise harm someone after they are down — unless the kicker is a villain, of course, then they are just emphasizing how much of a bastard they are. In some cases, this may cross the Moral Event Horizon if it is especially vicious, and the writers do not want us sympathizing with the one doing the kicking. The person who does this will almost never turn good, unless they have a spectacular moment of oh My God, What Have I Done?.

This proscription extends to hitting someone who is newly dead just to unleash aggression; no matter how evil they are, respect is Due to the Dead, and it can overlap with Desecrating the Dead.

Essentially, a form of Kick the Dog. A common example of fighting dirty, and thus a Combat Pragmatist will often not shy from it. Worse if the fighting had stopped and the character was not caught up in the heat of battle. Worse if the victim was clearly incapacitated. Still worse if you hadn't been fighting him prior to the injuries; breaking into a hospital to slaughter the wounded, or shooting down transportation carrying the wounded, or kicking someone to see if he survived for Cold-Blooded Torture, is usually an unforgivable offense, even trumping Men Are the Expendable Gender.

It may not be regarded as seriously wrong if the attacker had been in the throes of fighting his victim, and had just reason to feel Unstoppable Rage, so that he doesn't realize he was doing it. However, even if the attacker caught the victim crossing a Moral Event Horizon, had to fight furiously to subdue him before this trope, and didn't realize that the victim was stopped while he was doing it, it's not a good act.

In Real Life, under The Laws and Customs of War, it is a war crime — as is Playing Possum and I Surrender, Suckers, because it encourages soldiers to do this. In a fight, continuing to attack your assailant after they've been incapacitated or in the process of backing down is a good way to void any claim of self defense or reasonable force if you are arrested and charged, so Do Not Try This at Home.

See also No-Holds-Barred Beatdown for when a bad guy does more than just kick you when you are down — although that may not start out like this, with the hero able to defend himself somewhat, it usually turns into it. A Finishing Move that can only be used on downed opponents may also involve this, such as a Coup de Grâce, Double Tap or Finishing Stomp.

Almost all cases a hero is committing this trope rather than being victim to one are a clear cut case of Good Is Not Soft, if not Good Is Not Nice. Might also overlap with Pragmatic Hero or Combat Pragmatist if it was for the direct precaution of making sure they definitely wouldn't get back up.

May overlap with a Humiliation Conga (which is basically doing this to somebody's dignity rather than their body). Contrast Get It Over With, as well as Once Is Not Enough, where it would be sensible to do this but the character reveals his Genre Blindness and terminal idiocy by failing to. Compare Finish Him!. You Get Knocked Down, You Get Back Up Again is a videogame-specific defiance.

After knocking an opponent down, Bao can continue dealing damage to them with his Rikatsu Shu command normal.

Alternative Title(s): Kick Them While Theyre Down

After knocking an opponent down, Bao can continue dealing damage to them with his Rikatsu Shu command normal.