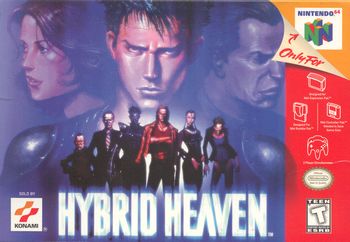 Hybrid Heaven was one of the very few RPGs released for the Nintendo 64. It was made by Konami and released in 1999.
Advertisement:

You play as Diaz, a genetically modified being created by aliens to assist in their mad plot to take over the world. You quickly learn the horror of your misdeeds and seek to bring down this alien organization from the inside, saving the world in the pro—

No, it turns out that you're not Diaz at all. You're actually Johnny Slater, Secret Service agent extraordinaire, kidnapped by aliens and disguised as Diaz to prevent the evil alien menace from making a clone of the President and using him to take over the world.

...the story isn't the most original thing in the world. What is original about the game is its unique combat system. When engaging in a fight with an enemy, you and your opponent immediately put up your dukes and begin circling around each other. You navigate a series of menus to determine if you want to punch, kick, or throw the enemy, and then you go on to specify exactly what kind of punch, kick, or throw you want to use. It's a rather interesting blend of an RPG/Fighting/Wrestling game. Additionally, while your character does level up in a traditional RPG style, he also levels up in several other ways. The various moves that you use also level up to increase their power, and all of the limbs that your character uses in combat level up their offense or defense depending on how often you use them/how often they get hit.

Despite this interesting system for combat, it's very easy to recognize that the game is quite flawed. Outside of combat, the character can be rather difficult to control, and most of the game consists of little more than running down dozens of similar-looking hallways, blowing up robots, and occasionally fighting a new enemy. But it's entertaining. There are few other games, after all, where suplexing a horrific monster isn't just one way to take it out- it's the best way to take it out.

The game was released to rather average reviews and scores, and would probably have completely disappeared from peoples' memories were it not for the fact that it is one of only a handful of RPGs released for the N64.