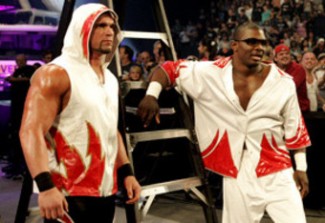 The World's Greatest Tag Team is a professional wrestling tag team consisting of Shelton Benjamin and Charlie Haas. The duo debuted near the end of 2002 in World Wrestling Entertainment as part of Kurt Angle's new faction, Team Angle. After they broke ranks with Angle and started feuding with him, they adopted the "World's Greatest Tag Team" name. Both sharing amateur wrestling backgrounds, the duo proved to be highly successful performers in the ring. More impressively, they debuted during a period where popular tag teams such as Edge & Christian and The Hardy Boyz were no longer together, so TWGTT helped to fill the void in the tag team scene. Unfortunately, the duo split up in 2004 after Benjamin was traded to the Raw brand. While Benjamin went on to have a relatively successful singles career, Haas was lost in the shuffle and was briefly released in 2005 before returning to the company the following year. In 2006, the duo re-formed their tag team before they were eventually split up again. The two were both released from their contracts in 2010. They both found their way to Ring of Honor and competed there for three years. Benjamin left for New Japan Pro-Wrestling at the very end of 2012; Haas stayed in Ring of Honor until March 2013, when he quit in what so far appears to have been a legitimate shoot, disbanding the team.