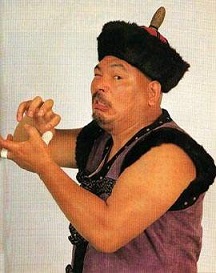 Masashi Ozawa (b. 1947) is a retired Japanese Professional Wrestler who competed in the 1970s and 1980s as Killer Khan. He debuted in 1973, starting his career in New Japan Pro-Wrestling under his own name. He took on the Khan gimmick in 1979, based on a suggestion by Karl Gotch. He competed for a variety of territories, as well as for WWE and All Japan Pro Wrestling. He retired in 1987. He is a former NWA United States (Florida) Tag Team Champion

. In 1981, both Pro Wrestling Illustrated and The Wrestling Observer Newsletter named his feud with André the Giant "Feud of the Year," and PWI also named his May 2nd match with Andre "Match of the Year."