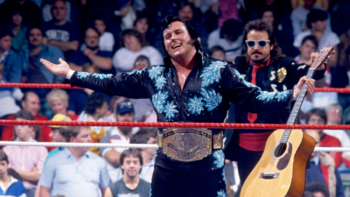 Roy Wayne Farris (born January 25, 1953), better known by his stage name The Honky Tonk Man, is an American pro wrestler, best known for his run in the then-WWF playing the character of a cocky Elvis Presley's impersonator.

Having wrestled in various independent leagues since 1978, The Honky Tonk Man made his debut in the WWF in 1986. Originally planned to be a fan-favorite face, the initial negative reaction to the character caused its reinvention as a smarmy heel, managed by Jimmy "Mouth of the South" Hart note Who was then billed as "Colonel Jimmy Hart". His first major feud would be against Jake "The Snake" Roberts.

In 1987, Honky Tonk Man would defeat Ricky "The Dragon" Steamboat for the WWF Intercontinental title

. He would remain Intercontinental Champ for the next year and three months, fending off challenges from wrestlers such as "Macho Man" Randy Savage, George "The Animal" Steele, and Brutus "The Barber" Beefcake (By cheating... quite often).

Honky Tonk Man was originally scheduled to take on Beefcake at the 1988 SummerSlam Pay-Per-View event. However, right before the event, Beefcake was written into a feud against "Outlaw" Ron Bass, and was to be replaced in the match by a mystery opponent. That mystery opponent would end up being the then-red-hot Ultimate Warrior, who defeated Honky Tonk Man for the belt in a Squash Match that only lasted 31 seconds.

Throughout 1989 and 1990, Honky Tonk Man would make appearances as a mid-card wrestler and teaming up with Greg Valentine as the "Rhythm & Blues" tag team. He would also on occasion serve as a heel color-commentator, until leaving the company in January 1991. Farris would bounce around various other promotions, including a short stint in WCW, before returning to WWF as a color commentator and manager in 1997. From that point on, Farris would make sporadic appearance on WWF programmings, including at the 1998 and 2001 Royal Rumble as a Joke Character entry, as well as numerous appearances at independent promotions . He was inducted into the WWE Hall of Fame in 2019.

And do not confuse him with that Clint Eastwood's flick

or the Steve Young's album

"Ladies and gentlemen... The Honky Tonk Man has left the arena."