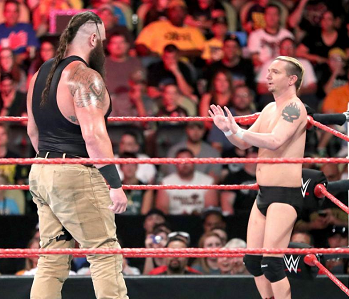 The time it would take for a normal person to read this entry is about six times as long as the match Hulk Hogan had with Yokozuna for the WWF Championship at WrestleMania IX. This is what is called a Squash Match.

The squash match is an extremely quick match, where one guy completely wrecks the other. These matches rarely last longer than a minute. Squash matches are usually used to portray the squasher as an unstoppable force. The Giant and the Wrestling Monster are the most common squashers, though it's not uncommon for a more average-sized wrestler to benefit from squashes.

There are three main tactics behind a squash match:

There's a fourth, much rarer use for the squash match, and that's when it's used to set up a Wham Episode where a high-tier star gets absolutely Worfed when the audience was expecting a more even contest- see Cena vs Lesnar, Lesnar vs Goldberg, and Cody vs Lee below. When done properly, this can create some of the greatest and most shocking moments in wrestling history; when done badly it can badly derail a wrestler's career, but either way it's not something that can be done often.

This tactic was most in vogue during the late Eighties and early Nineties, where top stars retained their star power by being fed a steady supply of rookies while their upcoming opponents were groomed in the short-term by the same method. A typical episode of Monday Night Raw during that time would consist of four to five short squash matches, and one main event that would usually be either a squash by a top-level star or end in a non-finish. The faceless losers that were on the receiving end of these matches were euphemistically referred to as "enhancement talent" (aka Jobbers, as in "doing the job", 'cuz someone has to lose), with a handful gaining cult fame or even making entire careers out of it.

note In professional wrestling, the majority of work is usually done by the person receiving the moves rather than the person performing them: setting up the move, executing the move in a safe fashion for both wrestlers and making it look like the move was effective. Because this skill set is so critically important, this can lead to a strange phenomenon where the perpetual losers are actually better at their jobs than the winners, and stay losers because they're so good at making others look better.

It's worth pointing out that squash matches alone are usually a very poor way of getting a wrestler over. While it is true that if a wrestler never loses, he will inevitably get over with the fans, it usually takes either incredible charisma or superior ring ability to make your mark on the average wrestling fan. Contrast Goldberg - whose sheer intensity during his matches was something truly special to behold - with "The Masterpiece" Chris Masters, who boasted a submission hold that was booked to be unbreakable yet was utterly unremarkable in every other area.

An over-abundance of squash matches were also one of the reasons why WWE lost their lead in the ratings battle with WCW for over a year, as their predictable and boring squashes were forced to compete with Monday Nitro's packed card of quality, competitive matches every week. WWE was eventually forced to change their tactics and ditch their reliance on squashes for their main television programs, although their C-level shows (e.g. Superstars, Sunday Night Heat, Velocity) would continue the old ways.

Compare Begin with a Finisher, Curb-Stomp Battle, and The Worf Effect (given wrestling's nature, it's possible to pull off any of those tropes without the recipient losing a match). Not to be confused with the racket and ball sport known as squash, though Heather McKay did "squash" her competition for 19 years.