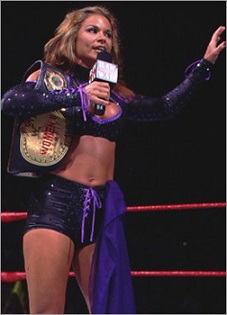 Lisa Mary Moretti (born November 26, 1961) is a retired American professional wrestler, manager and trainer from Inglewood, California best known for her work in the 1980s as Tina Ferrari and from 1999 to 2005 for WWE as Ivory. Trained by Mando Guerrero, she debuted in 1986 for GLOW, where she would go on to be a one-time GLOW Champion and a one-time GLOW Tag Team Champion with Ashley Cartier. She made her PPV debut in the Street Fight Lingerie Battle Royal put on by former GLOW and then-POWW promoter David McClane at AWA SuperClash III. She spent the next decade working various independents until she caught on with WWE. She debuted as Ivory on the February 13, 1999 Raw as the new manager for the tag team of D'Lo Brown and "Sexual Chocolate" Mark Henry. She would go on to be a 3x WWE Women's Champion

. After 2002, she was used largely as a trainer for WWE Tough Enough and in WWE's developmental program at OVW. She was released in 2005 and went on to wrestle for various independents before retiring in 2006. She would win the NWA Pacific Northwest SuperGirl's Championship at an Elite Canadian Championship Wrestling show before putting up the boots and was inducted into the WSU Hall of Fame in 2011, and then the WWE Hall of Fame in 2018. She was one of the original WWE Divas.