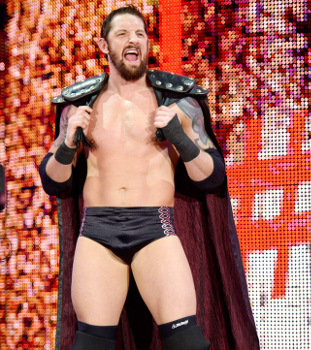 B-b-b-b-BOOM!
"I am sorry, ladies and gentlemen, I'm afraid I have some BAD NEEEWS..."
Advertisement:

Stuart Alexander Bennett (born August 10, 1980 in Preston, England) is an English bare knuckle boxer turned professional wrestler who debuted for NWA UK Hammerlock Wrestling in 2004 as Stu Sanders. He went on to work for Dropkixx Wrestling, Real Quality Wrestling and All Star Wrestling events, as well as the Welsh promotion creatively called Welsh Wrestling. He would win the Dropkixx IWC Heavyweight Championship as he moved through the UK scene.

In 2006, he got a developmental deal with WWE, who repackaged him as Lawrence Knight, although later it was changed to Wade Barrett. He is best known as the winner of the inaugural season of NXT, and, more importantly, as the original leader of what was shaping up to be one of pro wrestling's iconic Power Stables, The Nexus (until that didn't exactly work out). Afterwards Barrett formed The Corre with former Nexus members Heath Slater and Justin Gabriel in January 2011 and won his first Intercontinental Championship, a title that he won five times overall.

He began appearing on WWE programming as Bad News Barrett in late 2013, a figure standing at a podium who serves to inform the wrestlers and/or the audience of whatever poor fortune they're about to experience, until he became the King of the Ring winner in 2015 and changed his ring name to King Barrett. He left WWE in May 2016 and didn't make another wrestling appearance until WCPW's No Regrets PPV just under a year later, where he was a guest commentator alongside Matt Striker and Dave Bradshaw. In October 2017, he was named the General Manager of the promotion, now renamed Defiant Wrestling. He held the position until April 2018, when he relinquished it to the retiring Jay Melrose.

In November 2018, he was revealed to have joined Lucha Underground as the Unknown Benefactor. In December 2019, he was named as color commentator for NWA Powerrr, replacing the departing Jim Cornette. In September 2020 he returned to WWE as a commentator for NXT.

Can these tropes have a bit of decorum, please?:

"Your entire set of words above have been officially redacted from the WWE Universe. Have a great day!"