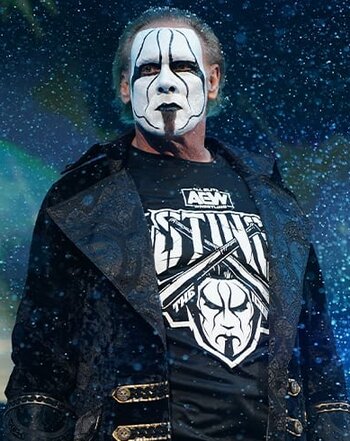 "It's STIIIIIIIIIIING!"
"When a man's heart is full of deceit, it burns up, dies, and a dark shadow falls over his soul. From the ashes of a once great man has risen a curse, a wrong that must be righted. We look to the skies for a vindicator, someone to strike fear into the black hearts of the same men who created him. The battle between good and evil has begun. Against an army of shadows comes a dark warrior. The purveyor of good, with a voice of silence and a mission of justice. THIS. IS. STING."
— Voiceover from WCW Clash of the Champions XXXV
Advertisement:

Steve Borden, Sr. (born March 20, 1959) is better known to wrestling fans as (The Man Called) Sting. Beginning his career in 1985, he was recruited by a talent scout named Rick Bassman to train with three other wrestlers known as Power Team USA. Then known as Flash Borden, he and fellow Power Team USA member Jim "Justice" Helwig (who later became the Ultimate Warrior) were called up by Jerry Jarrett (father of Jeff Jarrett) and joined the Continental Wrestling Association as the "Freedom Fighters". The two later joined Bill Watts' Universal Wrestling Federation in 1986, renaming their team the "Blade Runners" and Borden and Justice renamed themselves Sting and Rock respectively.

But the majority of Sting's career saw him working in WCW from 1987 (back when it was still known as Jim Crockett Promotions) until the company's demise in 2001, where he became the company's biggest star during the 1990s. Starting out as a bleached blonde surfer bum type, he later transitioned into the Eric Draven-inspired look which (apart from an ill-conceived Joker costume in 2011) he's retained to this very day. Sting stayed a member of the WCW roster up until the company's demise in 2001, feuding with the New World Order; he even wrestled in its last match, defeating his frenemy and fellow veteran Ric Flair.

Prior to 2014, Sting had never worked for WWE in any capacity since WCW's demise. Choosing instead to have control over his career and his gimmick, Sting worked the independent circuit until around 2006, when he became an on-again/off-again member of the TNA roster, with multiple title reigns. He left TNA in early 2014, taking several months off until April, appearing on a WWE special following the death of his good friend and former tag team partner the Ultimate Warrior. He has since appeared in other retrospectives on Warrior's legacy, sparking rumors (correct, as it turned out) that he was in talks to perform on WWE television, a persistent dream match of the last decade. On the July 14, 2014 episode of Raw, Sting appeared in a spot for the WWE 2K15 video game as a pre-order bonus character. Sting made his official WWE debut at Survivor Series 2014 attacking The Authority and ruining their match against Team Cena. note In case you're wondering, the current "Biggest star from the English-speaking world never to have worked for WWE in any capacity" is now believed to be Fritz Von Erich. Yes, even Kenny Omega briefly worked for WWE's developmental territory Deep South Wrestling early in his career.

Among his in-ring achievements, he is a former 2x NWA World Heavyweight Champion

. He is the inaugural inductee into the WWE Hall of Fame Class of 2016, where he officially announced his retirement from wrestling...

Do not confuse with the trope, the musician Gordon Sumner (although they have been photographed together), the film, the dagger used by Frodo and his Uncle, or the painful infliction of the same name.