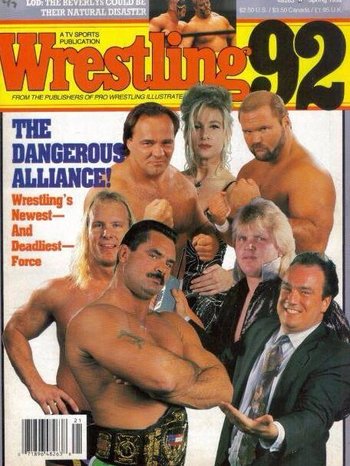 The Dangerous Alliance was a Professional Wrestling Power Stable in WCW from 1991-1992. WCW Halloween Havoc 1991 on October 27th started with a scene in the parking lot where Larry Zbyszko attacked Barry Windham and smashed his hand in a car door. Later that night, The WCW Halloween Phantom

Sting. The group would come to include WCW World Television Champion

The Enforcers (Arn Anderson and Larry Zbyszko) and Bobby Eaton. At Clash of the Champions XVII, Rude defeated Sting for the US Heavyweight Title and never lost it, since he had to forfeit it due to injury before Starrcade in December 1992. Dustin Rhodes and the returning Ricky Steamboat defeated Anderson and Zbyszko for the Tag Titles that same night, though Anderson and Eaton later won them back for the D.A. The group proceeded to fall apart after Sting's Squadron (Sting/Steamboat/Rhodes/Windham/Nikita Koloff) defeated them in War Games at WrestleWar 1992 on May 17th.