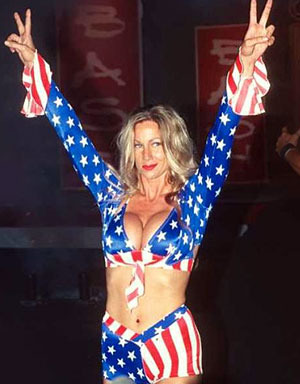 Debrah Miceli (born February 9, 1964) is a retired Italian-American pro wrestler and valet best known for her work in the 1980s and 1990s as Madusa and (less frequently) Alundra Blayze.

WWE brought in Madusa sometime in 1994 to revive the Women's Championship. (Sherri dropped the belt to Rockin' Robin who pretty much disappeared, and the title with her until Miceli showed up as "Alundra"). But she was only around for a year before jumping to WCW, where she dumped the belt in the trash. In doing so, she became the Helen of the Monday Night Wars.

Though Ric Flair had shown up at WWF with the NWA belt, that incident was different. Flair and the WWF treated the belt with the reverence it deserved. This was the opposite. It was a public declaration that the old rules no longer apply. (In fact, it's generally believed to have been one of the deciding factors that led to the Montreal Screwjob.)

After she retired from wrestling in 2001, Micelli became a full-time monster truck driver. The WCW had a fleet of monster trucks competing in the '90s and early '00s, and Micelli was the only wrestler to drive their own truck. Because she owned the Madusa name, she continued to drive the truck so after she left the WCW and the other wrestler trucks were all discontinued, and she has competed at events like Monster Jam. In 2004, she was part of a three-way tie for the Monster Jam World Finals for freestyle competition.

In 2015, WWE inducted Miceli (under her WWE name) into their Hall of Fame. She actually took the belt out of the trash for her speech. Later that year , she became the commissioner of World Wonder Ring ST★RDOM's USA branch, in preparation for its USA tour later that month.

Not to be confused with the mythical Medusa, or with....well, Alundra.