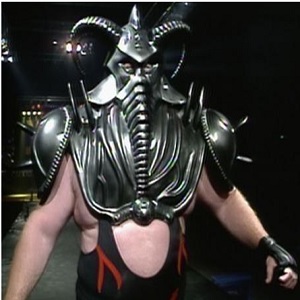 "I FEAR NO MAN AND I FEEL NO PAIN! IT'S TIME! IT'S TIME! IT'S VADER TIME!"
"I am the reaper of wayward souls, I am the world heavyweight champion and this, this is the holy grail of everyone who steps foot in this ring. And that is why it was so important that I possess it, because every wayward soul would stray from crossing the path of The Undertaker! But now, consumed by the lust of fortune and fame, the recognition that this championship brings will lead them down a road for which they will be sorry they ever embarked. Because that road ends in my yard. For them it will be a graveyard."
— The Undertaker, Friday Night Smackdown, October 9, 2009.
Advertisement:

Is he out to win championship belts? To stand at the top of the tournament? Does he live to entertain the fans? Is it all about the money? No, all he cares about is destruction, preferably the destruction of other living things. His shadow stretches far, his footsteps fall hard, he strikes swiftly, his Battle Cry being the only warning, if you're lucky. He's as strong as he is fast, as tough as he is agile, he's savage and is likely from Parts Unknown. He's a monster!

Some monsters are too dumb to understand anything other than fighting. Some are reasonably intelligent if a little disturbed, criminally psychotic by most standards outside of the wrestling world. Some turn out to not be that bad, simply misled by a depraved manager, but these are bad for the reigning champion, as the manager can give them a focus they would otherwise lack. A monster's strength and fury can be fueled by external forces like medicine that had unintended side effects on him. Some claim to have supernatural powers, some claim to be beasts that only take the guise of men.

What all monsters have in common is incredible endurance. They may be huge, but being big isn't enough. They may be crazy or vicious, but that still isn't enough. Many have power contested only by the The Giant or the World's Strongest Man along with the agility of high fliers, but to be a monster, he must also be insanely tough. Some will teeter but not fall. Others will always get back up. The worst seemingly Feel No Pain at all: move them, bruise them, cut open their bodies, but it will do little to slow them down. After all, reducing his selling is the easiest way to convince the audience this guy is abnormal.

The biggest thing that makes a monster different from The Giant is movement. Monsters are tough, but being unmovable is not nearly as important to their psychology as for giants. Monsters are also more likely to chase down fleeing foes than giants. Wrestlers will often be given giant gimmicks to emphasize their appearance while distracting viewers from their lack of talent. Monsters may lack in some areas of Wrestling Psychology or charisma, but the gimmick is usually given so a wrestler can spend more time showcasing their offensive moves without having to slow down too much to sell. The Wild Samoan is a subtrope.

The term "monster heel" is often used to describe this kind of wrestler, however, since monster gimmicks are usually given to talented athletes it is not unknown for them to take the face role. Depending on how abnormal the gimmick is supposed to be the face examples may overlap with Monster Knight.