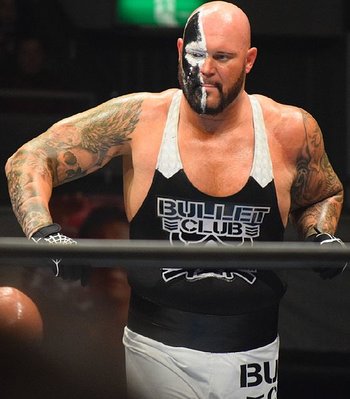 Shortly after beginning his career in West Virginia, Pennsylvania, and Maryland-based promotions, Hankinson auditioned for the $1,000,000 Tough Enough in 2005. Despite failing to make it as one of the final ten contestants, he was signed to a contract by WWE and was assigned to the Deep South Wrestling (DSW) developmental territory, where he wrestled as Deacon Deville before changing his ring name to The Freakin' Deacon.

On May 2006, Hankinson debuted on the main roster as an impostor Kane; wearing Kane's old mask and ring attire, attacking the real Kane during or after his matches. The pair finally faced off in a match at the Vengeance pay-per-view, with the impostor Kane. One night later, however, the storyline was abruptly ended when the original Kane attacked the impostor Kane, removed his mask, and threw him out of the building.

Hankinson returned to Deep South Wrestling, until in 2007 he re-appeared on the SmackDown! brand as Festus, alongside Ray Gordy (son of Terry Gordy of The Fabulous Freebirds fame) as "Jesse", with the gimmick of a pair of Southern boys. Despite Festus looking dimwitted and unresponsive, Jesse was in awe of his tag team partner; this was revealed to be because when the opening bell rang, Festus' personality changed into a very focused and angry competitor as compared to the mentally challenged character he had portrayed, when the bell rang to signify the end of the match, Festus returned to his docile self. On April 2009, Festus was drafted to the Raw brand as part of the 2009 Supplemental Draft and, as a result, was separated from his tag team partner Jesse, who remained on SmackDown!.

Hankinson returned to SmackDown! on November, however, repackaged and now under the name Luke Gallows, sporting a new attire with a goatee and shaved head. CM Punk later revealed that Gallows was actually Festus' true identity and claimed that Gallows' family and friends enabled him to become drug-addled, which led to the mental state he was in as Festus, before stating that Gallows was cured due to Punk showing him the Straight Edge lifestyle. Thus, Gallows became the enforcer and "disciple" of Punk, forming the Straight Edge Society alongside Serena Deeb, and later, Joey Mercury. After the stable broke up in September 2010, Hankinson was released from his WWE contract on November.

Hankinson would next appear prominently in TNA two years later in November 2012, where he was revealed to be a member of the heel Aces & Eights stable under the ring name D.O.C. (short for Director of Chaos). However, eight months later he left TNA after contract negotiations fell through, the departure being explained on-screen as him having turned in his kutte after losing the bid of Vice President of the stable to Mr. Anderson.

On November 2013, Hankinson was revealed to have been brought in by New Japan Pro-Wrestling as a participant in the 2013 World Tag League, under the name Doc Gallows, teaming with Karl Anderson as part of Bullet Club. Instant chemistry and success followed, as Anderson and Gallows won the 2013 World Tag League tournament, then went on to become IWGP Tag Team Champions at Wrestle Kingdom 8. Throughout the next couple of years, Anderson and Gallows would gain back and lose the IWGP Tag Team titles three times before both left the company for WWE in February 2016, shortly after fellow Bullet Club member AJ Styles did the same.

Returning to his former WWE ring name, Luke Gallows, he made his return to WWE alongside Anderson on May 11, eight days after WrestleMania 32, and very quickly they made their intentions known: to reform their alliance with AJ Styles. It took some convincing initially, but eventually it got done. Still, their WWE run was largely seen as disappointing; two tag team championship runs, two reunions with Styles, and one reunion with OGBC leader Finn Bálor, all of which were brief, were the sole highlights of a run marred by constant losses, including some in matches with comedy stipulations. WWE eventually released Gallows and Anderson in April 2020, less than a year into a five-year restructured contract, in a wave of budget cuts.

Following their release, Gallows and Anderson teased joining numerous companies, with Gallows mainly hinting at a possible return to Impact Wrestling, the former TNA. In July, Gallows returned to Impact and brought his fellow Good Brother with him; the two also stated their intent to resign part-time with NJPW as soon as conditions allowed, which eventually came to pass in 2022.