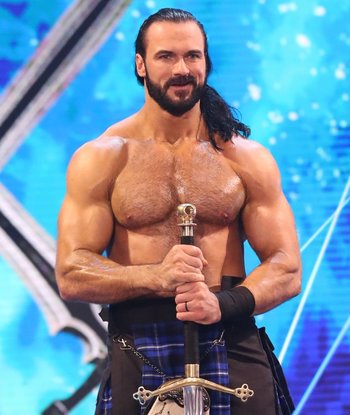 Andrew McLean "Drew" Galloway IV (born 6 June 1985) is a Scottish professional wrestler who first gained fame in the United Kingdom under his real name before becoming known globally for his time in WWE under the ring name Drew McIntyre, on two separate occasions.

Since the age of fifteen, he spent years wrestling around the British Isles using the gimmick of "Thee" Drew Galloway, winning the Heavyweight titles of British Championship Wrestling (twice) and Insane Championship Wrestling (as its inaugural champion, no less) among others. Before too long, he signed with WWE in 2007 and Drew McIntyre was born. After a few months working an undefeated streak on SmackDown (and briefly going to Raw), McIntyre was sent to developmental territores Ohio Valley and Florida Championship Wrestling, where he enjoyed both solo runs and tag team work with Stu Sanders (both resulting in championships in FCW), as well as occasionally rekindled a rivalry from across the pond with Sheamus O'Shaunessy.

He resurfaced on mainline WWE television in 2009, with a new gimmick where Vince McMahon himself had declared McIntyre to be a future world champion, going on to dub him "The Chosen One". His main roster undefeated streak continued in spades, as he went on to win the Intercontinental Championship and become the bane of Teddy Long's existence before finally losing the championship a year later. Following this he would briefly form a tag team with Cody Rhodes to both torment Matt Hardy and Christian as well as capture the WWE Tag Team Championship, and after that team as well as enter a romance storyline with Kelly Kelly which ultimately went nowhere, with Drew slowly but surely being relegated to Superstars regular and jobber status on the main shows. This led him to eventually join Heath Slater and Jinder Mahal in a faux rock band stable called 3MB, which lasted nearly two years before he was released in June 2014.

Upon returning to the indies, Drew Galloway proceeded to make big waves, coming back to ICW in a subverted Big Damn Heroes run-in where he both saved and destroyed former best friend Jack Jester as well as cut a "mission statement" promo citing his intent to spark a revolution to "save" pro wrestling, inspired by the Battle of Bannockburn where Scotland first won its independence in 1314. Since then he's enjoyed meteoric momentum as one of the hottest acts on the independent scene on both sides of the Atlantic, winning the EVOLVE Championship, beating Jester to regain the ICW Heavyweight Championship, and turning both into World Championship titles by defending them in locales and against talents of several different nationalities. He also fought in WhatCulture Pro Wrestling, where he held the WCPW World Title until his resigning with WWE, dropping the title in a 30-man rumble match.

. He eventually lost the championship and then turned heel (the same in reverse order had taken place earlier in ICW), undergoing a series of short feuds as well as becoming the Impact Grand Champion temporarily before ultimately parting ways with the now-renamed Impact Wrestling in February 2017.

To the surprise of many, he turned up at WWE's NXT TakeOver: Orlando event about six weeks later and announced he was making his return to the promotion under their NXT brand. This culminated in him winning the NXT Championship from Bobby Roode at TakeOver: Brooklyn III. In 2018 he was drafted to Raw as part of the Superstar Shake-up and as Dolph Ziggler's teammate, eventually winning the Tag Team Championships. After spending much of 2019 in the upper-midcard, he entered 2020 triumphantly, first by winning the Royal Rumble then finally the WWE Championship at WrestleMania 36, making him the first Scottish-born WWE Champion, and also making him the thirty-first WWE Triple Crown Champion in the process.

In 2021, Pro Wrestling Illustrated named him the fourth best wrestler of 2021, behind Kenny Omega, Roman Reigns and Bobby Lashley.

"These tropes are Claymore Country!":