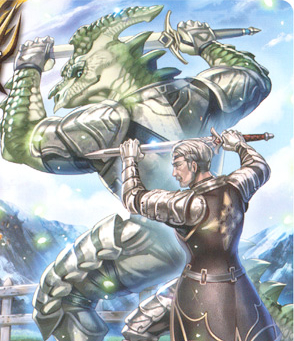 "For dragons to master the sword skills of men, hundreds of years of trial and error were involved."
Monsters are, well, monsters. They're uncouth, messy, dirty, disgusting, barbaric creatures with no sense of honor. The only times they do work together will more than likely resemble something akin to a horde than anything like a professional army.
Advertisement:

But, that's a bit too Cliché for most writers, so it's not that surprising to see many monsters that aren't mindless brutes. Monsters that are trained, with a thought for technique, tactics, strategy, valour, and (perhaps) a sense of honor that would make them seem almost respectable. A monster that's also a true warrior. They may be serving a Monster Lord, or be part of an army or similar.

This kind of character is often a Cultured Warrior and a Blood Knight, although they don't have to be. They're also more likely to be a Noble Demon, and thanks to the resonance the hero may have for this character, they may be found on any place on the Character Alignment scale in contrast to the usual Always Chaotic Evil treatment the characters race may receive in other works. This is often a case of My Species Doth Protest Too Much, but doesn't have to be. Because Most Writers Are Human, these characters are often more humanoid-looking as a result.

Their possibly supernatural nature gives them a higher chance of being a Magic Knight, although the magic they practice is often more of a destructive and dark nature than average.

If you have an entire army of Monster Knights, they're almost guaranteed to be a Badass Army as well.