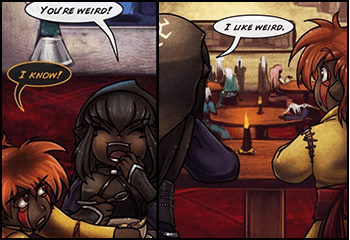 "But you're better than normal. You're abnormal."
— Fry, Futurama, The Cyber House Rules
Advertisement:

A character, moping about being weird, eventually finds someone who likes them because they're different.

The person is usually a child, under the natural assumption that kids have little prejudice, but also find anything with a strange appearance kinda cool. If the befriender is older it may be that they are a Nightmare Fetishist, and are fascinated by things other people find strange or creepy.

Sometimes, this only happens because the person the weird person befriends is blind.

Freakiness Shame is a subtrope. See also Ugly Cute and What Measure Is a Non-Cute?. If someone has a lot of pets that qualify under this, you have a Fluffy Tamer. If a character decides against curing some handicap for this reason, this is Keeping the Handicap.