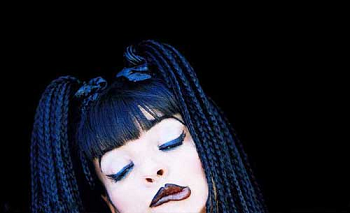 Catharina "Nina" Hagen (born 11 March 1955) is an iconic German singer - the face, heart and soul of 80's Berlin punk rock. She's known for experimenting with different styles (gospel is a recent favourite, as she's suddenly found Jesus), usually with definite opera, reggae, synth pop and classic rock influences. When she still lived in East Germany, she scored her first popular song with the poppy "Du hast den Farbfilm vergessen". Her fashion style is extremely flamboyant and her mannerisms are downright clownish, and her vocal range spans at least four octaves. She has a reputation of being a Cloud Cuckoolander and was for a time a favorite to be invited to various talk shows where she would spout weird views and Ice-Cream Koans. While her voice used to be extremely versatile in the 70's and 80's - she was capable from jumping between three octaves like it was nothing ("Naturträne"), could sing opera, scream and growl, and imitate all sorts of freaky voices, nowadays her voice has become extremely low and raspy due to years of extensive smoking.

back in 1978, her drug-fueled relationship

with Dutch punk artist Herman Brood, and her much lauded performance as Mrs. Peachum in a 1999 concert version of The Threepenny Opera. Also, she was Sally in the German dub of The Nightmare Before Christmas and Yubaba in Spirited Away. She also provided the theme song to the anime film Tenchi Muyo! in Love, "Alchemy of Love".

Her work includes the following tropes: