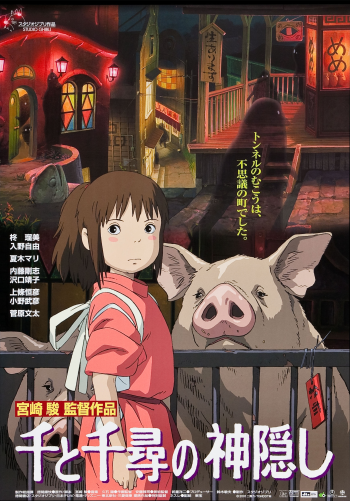 "Once you've met someone, you never really forget them; it just takes a while for your memories to return."
— Zeniba
Advertisement:

Originally, Princess Mononoke was meant to be Hayao Miyazaki's swan song, but much to the delight of the anime world, he returned with a film that managed to top Princess Mononoke's staggering box-office numbers. This film, Spirited Away (Sen to Chihiro no Kamikakushi, Sen and Chihiro's Spiriting-Away), is a symbolic and folkloric adventure film about a girl who enters the world of spirits. Comparable to Alice's Adventures in Wonderland, she has to navigate a place that adheres only to its own odd rules if she wishes to leave safely.

Chihiro Ogino (Rumi Hiiragi), a sullen young girl unwillingly moving to a new town, is stranded in the spirit world after her parents Akio (Takeshi Naito) and Yuko (Yasuko Sawaguchi) stop by what appears to be an abandoned amusement park and eat food that turns them into pigs. At first, her only aid is Haku (Miyu Irino), a mysterious boy who finds her shelter and a job in a bathhouse that caters to these spirits. Eventually, Chihiro makes more friends as she searches for a way to make her parents human again and escape the spirit world before she forgets her real identity. And that's all just within the first 30(ish)-minutes of the movie—and that doesn't even begin to scratch the surface of the odd denizens of the spirit world, ranging from the villainous bathhouse manager Yubaba (Mari Natsuki) to arachnid worker Kamajii (Bunta Sugawara) to the enigmatic, near-voiceless spirit No Face (Akio Nakamura).

The fact that it won the Oscar for Best Animated Feature Film (and, currently, is the only traditionally animted film as well as the only anime film to do so) should be noted, as the Oscars tend to favor CGI and/or American productions.

Not to be confused with the Australian TV show Spirited, the 1974 film Swept Away, that film's 2002 remake/Madonna vehicle, or the DreamWorks film Spirit: Stallion of the Cimarron.

Spirited Away was originally released on July 20th of 2001 in Japan, and an English dub produced by Disney was released in the United States the following year.

In 2019, Spirited Away was granted a re-release in Chinese theaters. It's worth noting that this 18-year-old movie

managed to beat the opening Box Office of the newly-released Toy Story 4.

A 2022 Screen-to-Stage Adaptation premiered in Tokyo, under the direction of English stage director John Caird. It is notably the third Ghibli film to receive a stage adaptation, following Kiki's Delivery Service and Princess Mononoke.