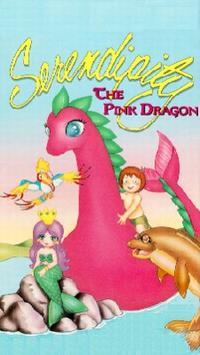 Serendipity the Pink Dragon is a 1983 anime (original title Serendipity Monogatari Pure to no Nakamatachi — "Serendipity Stories: Friends on Pure Island") by Zuiyo Enterprises that originally aired on Nippon Television and was edited into a feature-length movie for U.S. release in 1989 (other countries got the TV series in its entirety, including Canada (in French)). The story follows Bobby (or Kona in Japanese), a young boy who is shipwrecked in the Antarctic. He finds a pink egg and floats on it out to a magical island, where the pink sea dragon Serendipity hatches. The island where she lives is endangered by the threat of humans coming when Captain Smudge realizes there is gold on the island.

The original anime, and the movie made from it, was based on a series of children's books called, oddly enough, Serendipity Books. Each book was designed to deliver An Aesop, such as "Enjoy being you," "Treat others the way you want to be treated," and "Not everyone enjoys the same things."

The character designer for the anime is Yoichi Kotabe, a former collaborator of Hayao Miyazaki and Isao Takahata who later went on to a long association with Nintendo's Super Mario Bros. and Pokémon franchises.