Spoilers for this movie will be marked as usual. However, since this is a sequel to Toy Story, Toy Story 2, and Toy Story 3, it does contain unmarked spoilers for them. You Have Been Warned! 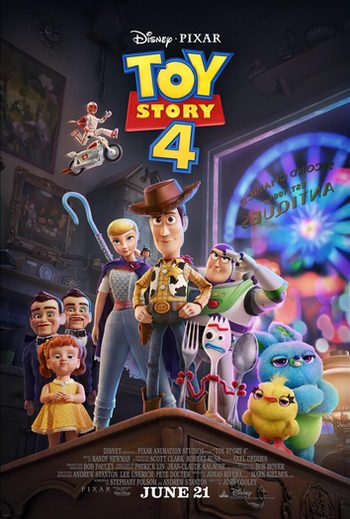 The adventure of a lifetime.
"I was made to help a child. I don't remember it being this hard."
— Woody
Advertisement:

Toy Story 4 is the fourth installment of the Toy Story franchise, and the twenty-first CGI animated feature made by Pixar. It was released on June 21, 2019 and marks the directorial debut of Josh Cooley.

Taking place about a year after Toy Story 3, the movie shows how Andy's toys are doing under Bonnie's care... and while most of them are having just as much fun as usual, Sheriff Woody has started to be forgotten by her during playtime, and he's not very happy about it. During Bonnie's orientation day at kindergarten, Woody secretly tags along and inadvertently helps her create Forky, a makeshift toy made from a spork and various other items, which, much to Woody's shock, subsequently acquires sapience. Despite the other toys trying to make him feel like part of the gang, Forky believes that he is just trash like his components and wants nothing to do with Bonnie or the others. Woody makes it his duty to keep Forky out of the trash can since Bonnie is so attached to him.

During a family road trip a day later, Woody and Forky end up falling out of the RV, and when they catch up after it stops at a carnival, Forky gets stuck in the local Second Chance Antique Store. Fortunately for Woody, he discovers that his long-lost flame Bo Peep has made a home in the area (after having been donated many years ago), now living as a "lost toy" with no owner. With the help of Bo, Buzz Lightyear, and a host of new toys, Woody sets out to save Forky before the family RV leaves.

Further Toy Story material is available on Disney+, namely the short series Forky Asks a Question (starring Forky) and the short Lamp Life, which is partly made of a Deleted Scene from Toy Story 4 and details Bo Peep's life after she was separated from Andy's other toys.

A pinball machine based on the film, also called Toy Story 4, was released by Jersey Jack Pinball in 2022.

♫ God only knows what I'd be without you.. ♫
Feedback