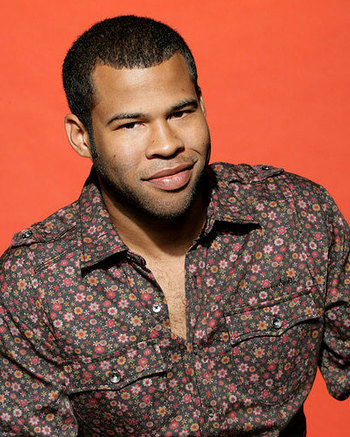 Jordan Haworth Peele (born February 21, 1979) is an American actor, writer, comedian, producer, and director. Although he started out in comedy, he now has a reputation as a great master of Horror.

Peele is perhaps best known as one-half of the comedy duo Key & Peele with Keegan-Michael Key, whom he met while starring on the FOX late-night sketch comedy series Mad TV. Their own sketch series, also titled Key & Peele, ran on Comedy Central from 2012 to 2015. In 2016, Key and Peele starred in the comedy film Keanu, which they also produced.

His 2017 directorial debut, the satirical horror film Get Out (2017), was a smash hit both critically and financially; it earned him three Academy Award nominations (Best Picture, Best Director, Best Original Screenplay), making Peele only the third-ever filmmaker note (preceded by Warren Beatty for Heaven Can Wait and James L. Brooks for Terms of Endearment) to receive those accolades for their debut release. He won Best Original Screenplay, becoming the first black screenwriter to receive that award.

Peele followed it up with another horror film, Us, in 2019, which had the second largest opening weekend for any original live-action film to date, behind only Avatar. The same year, he was the host and executive producer for CBS's online revival of The Twilight Zone.

Peele is married to actress and comedian Chelsea Peretti.