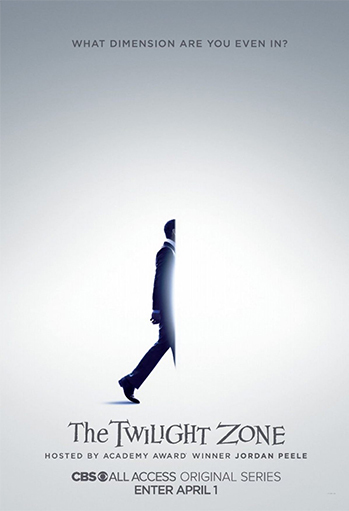 "You're traveling through another dimension, a dimension not only of sight and sound but of mind. It is the middle ground between light and shadow, between science and superstition, and it lies between the pit of one's fears and the summit of one's knowledge. You are now traveling through a dimension of imagination. You just crossed over... into the Twilight Zone."
— Jordan Peele, Opening Narration
Advertisement:

The third revival of The Twilight Zone, which was made for CBS All Access and ran for two seasons. This iteration was hosted by Jordan Peele, who also served as an executive producer throughout his company Monkeypaw Productions. The first teaser played during Super Bowl LIII and the first season consists of ten episodes featuring many prominent actors in guest roles.

On May 30, 2019, CBS All Access released a special Black and White edition of the first season

When the tropes are not the tropes, what dimension are you even in?

open/close all folders
A-D
E-H
I-L
Advertisement:
M-P
Q-T
U-W
X-Z
"What dimension are you even in?"