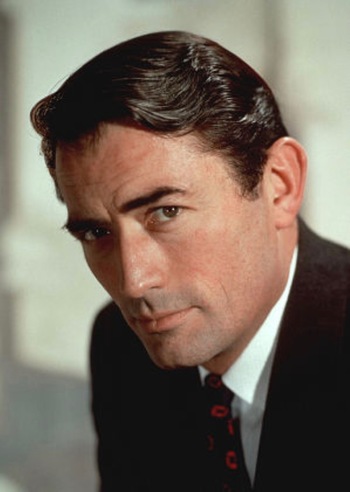 "Inside of all the makeup and the character and makeup, it's you, and I think that's what the audience is really interested in... you, how you're going to cope with the situation, the obstacles, the troubles that the writer put in front of you."
Advertisement:

Eldred Gregory Peck (April 5, 1916 – June 12, 2003) was an American actor who was one of the most popular film stars from the 1940s to the 1960s. A tall, dark, clean-cut, all-American with a stirring voice and a sincere squint, he mostly made a career of playing incorruptible pillars of virtue and wisdom. Best known for his Oscar-winning turn as Atticus Finch in To Kill a Mockingbird (voted by the American Film Institute as the greatest hero in the history of American film, a week before Peck died), he played similarly admirable characters in films such as The Yearling, Gentleman's Agreement, Twelve O'Clock High, and The Big Country. The Gregory Peck Law goes like this:

The frequency with which a character threatens Gregory Peck and his family is inversely proportional with their chances of surviving the movie.

He also liked to occasionally play way against type, with roles such as bigoted rapist Lewt McCanles in Duel in the Sun, or Josef Mengele in The Boys from Brazil. In real life, he had a reputation as a gentleman and was a classical Nice Guy — which is a key reason he enjoyed playing Atticus Finch so much. In fact, Harper Lee (who wrote To Kill a Mockingbird) said he reminded her of her father (on whom she'd based Atticus Finch). So much so that she gave Peck her father's pocketwatch, and he wore it in the film.

Peck was married twice and had a total of five children (three from his first marriage, two from his second). He died of cardiorespiratory arrest and bronchial pneumonia in 2003.

His grandson, Ethan Peck, is the latest actor to play the character of Spock in Star Trek: Discovery.

Fun fact: His name is Cockney Rhyming Slang for "neck". Depending on age, this is probably the way that British youngsters are introduced to Gregory Peck. It's definitely the most iconic (and imitated) Cockney slang term, next to "apples and pears" note "stairs", by the way.

List of his works with pages on this wiki: