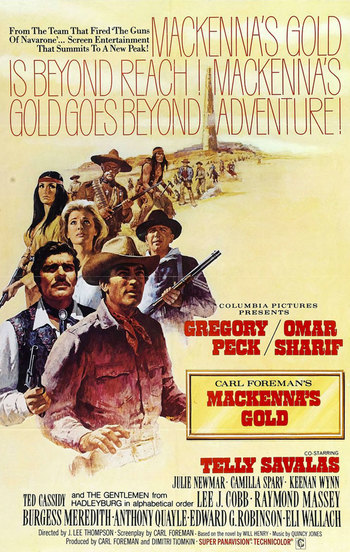 A 1969 Western film, directed by J. Lee Thompson and based on the novel of the same name by Heck Allen (billed under the penname of Will Henry), which involves the legend of a lost canyon of gold and the diverse group of people who join forces to go in search of this untold wealth.

Gregory Peck stars as Sam Mackenna, marshal of the town of Hadleyburg, who takes the secret of "Canon del Oro" into his hands when a dying old Apache shaman leaves behind a map that details the route to the Apache territory. Mackenna is unexpectedly captured by a Mexican bandit named Colorado (Omar Sharif) and his cutthroat gang of Apaches and outlaws; Colorado has long sought Mackenna's death since he drove him out of the state many years ago. But, when he finds out that only Mackenna knows how to reach the infamous canyon of gold, he has no choice but to keep him alive. Along the way, many infected with "Gold Fever", including renegade soldiers and gentlemen from town, are caught up in the adventure.

Mackenna's Gold was made during a period when the traditional Hollywood Western was losing popularity. Therefore, unless a Western was a magnificent feat such as The Wild Bunch or Once Upon a Time in the West, or appealed to "modern" sensibilities like Butch Cassidy and the Sundance Kid, it was quite forgotten. Originally intended as a roadshow picture, Mackenna was filmed at an overall length of three hours, and cut down to just a little over two hours by a nervous studio, who felt these kinds of movies were going out of fashion. Amongst the footage included for this alternate version (currently unavailable) is an entr'acte, intermission, and closing music.