Film / The Scarlet and the Black 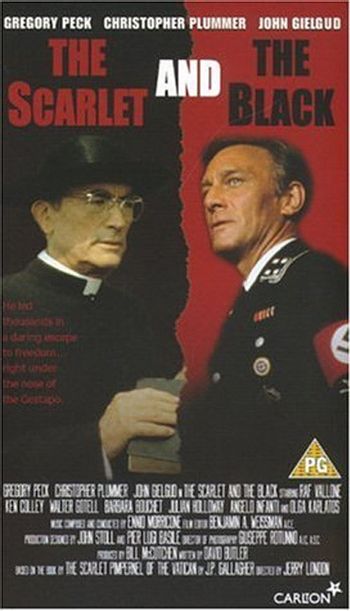 The Scarlet and the Black is a 1983 Made-for-TV Movie starring Gregory Peck, Christopher Plummer, and John Gielgud, about one of the lesser known heroes of World War II: Monsignor Hugh O'Flaherty (Peck), an Irish priest assigned to work for the Holy Office (i.e. the Inquisition) at the Vatican. He uses his diplomatic immunity (as the Nazis have sworn to respect Vatican sovereignty on Vatican territory) to run a large and complex network hiding and protecting escaped POWs from being recaptured by the SS. His foe in this is Herbert Kappler (Plummer), a ruthless SS commander who eventually decrees that O'Flaherty will be shot on sight if he crosses the white line in St. Peter's square that delineates where Vatican power ends....