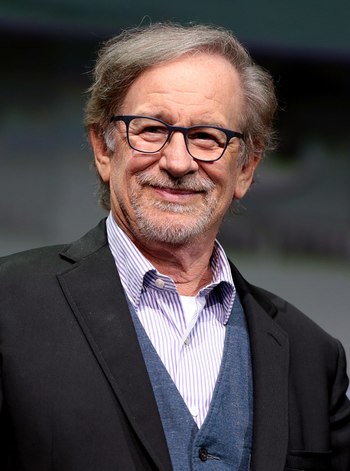 "I dream for a living."
Advertisement:

Every so often someone emerges in a field and manages to not only revolutionize it, but do so several times. Director and producer Steven Allan Spielberg (born December 18, 1946) is one of those people, with a career that has gone uninterrupted since the mid-'70s. To put it simply, he is one of the most influential powers in Hollywood.

Spielberg was born on December 18, 1946 in Cincinnati, Ohio to Leah (née Posner, later Adler), and Arnold Spielberg. After playing with his father's 8mm camera as a kid, he enrolled in a community college with a small film program and used those connections to get work directing TV episodes, including the pilot episode of Night Gallery.note That Night Gallery episode turned out to be quite a Hollywood passing of the torch, since the star was none other than Joan Crawford. He also worked as an assistant at Universal's editorial department, and snooped around on film sets to learn more about the trade note Charlton Heston recounted in his autobiography In the Arena how Spielberg tried several times to infiltrate the set of 1965's The War Lord, only to be ejected. Director Franklin J. Schaffner finally gave in and let him watch what was being filmed. In 1971 he got his big break directing the low-budget, cult hit TV film Duel. Duel was an expertly made, taut thriller that was such a hit on TV that he was allowed to shoot more scenes to give it a cinema release in Europe.

It got him a lot of attention, enough for him to be brought on as the director for the film that would launch him into the stratosphere: Jaws, the first summer blockbuster (setting the record for highest grossing movie just before Star Wars came out, pushing the record up even further).

With basically a blank check, he followed this with the Benevolent Alien Invasion film Close Encounters of the Third Kind, the 30's serial throwback Raiders of the Lost Ark (the first of the Indiana Jones films; he directed all the sequels as well) and the family favourite E.T. the Extra-Terrestrial, which became the highest-grossing film of all time in its day (his second time achieving that milestone).

In 1985, he branched into directing drama, with his ultra-serious The Color Purple, which was nominated for several Oscars; it would not be his last excursion into this genre.

He is also known for being a collaborator with other very popular films including Poltergeist and The Goonies (a team effort with Richard Donner and Chris Columbus). Even recently he was found working in mega-blockbusters like Transformers.

Steven is a long time friend of George Lucas, ever since they met at a film festival when both were in college (Spielberg said he was insanely jealous of Lucas' student film that eventually became THX 1138). While their only official collaborations are Indiana Jones, and to a lesser extent The Land Before Time (Spielberg was supposed to direct Return of the Jedi, issues with the Directors Guild of America stopped that from happening), they frequently spend time together and discuss each other's projects. Spielberg was also a frequent collaborator with Stan Winston, the puppeteer and makeup virtuoso who brought the dinosaurs of Jurassic Park and the robots of A.I.: Artificial Intelligence marvelously to life. He's also famously collaborated with John Williams, with the composer providing the scores for virtually all of Spielberg's films.

In 1994, he was a co-founder of the studio DreamWorks SKG alongside Disney studio chairman Jeffrey Katzenberg and record producer David Geffen. Dreamworks and Spielberg (as producer) would later go on to make the first Medal of Honor video game, widely regarded as the PS1's GoldenEye. He still runs Amblin Entertainment.

Spielberg went on to make Hook in 1991, and Jurassic Park in 1993 (his third time making the most successful movie of all time), which revolutionized the use of CG animation in film. Schindler's List in the same year won the Best Picture Oscar and is treasured all over the world to this day, Saving Private Ryan won a handful of Oscars itself, and the controversial A.I.: Artificial Intelligence saw him taking over directorial reins from his good friend Stanley Kubrick, who died in mid-production. Catch Me If You Can re-teamed him with Tom Hanks from Saving Private Ryan, and became another acclaimed hit.

Spielberg has also done television work. He directed part of the pilot of Rod Serling's Night Gallery as well as a few TV movies in addition to Duel, and has produced television shows such as Amazing Stories, seaQuest DSV, ER, and United States of Tara.

He's also delved into animation. He collaborated with Don Bluth in the 1980's to produce box office successes like An American Tail and The Land Before Time, also starting his own animation studio, Amblimation, which would go on to produce the somewhat less successful We're Back! A Dinosaur's Story, An American Tail: Fievel Goes West, and Balto; it and Bluth would be spiritually replaced by Katzenberg's DreamWorks Animation (he also had input in DWA's first Shrek movie). He is also known as the executive producer for (and mistakenly believed to have created, thanks to In Case You Forgot Who Wrote It) Warner Bros. Silver Age cartoons Tiny Toon Adventures, Animaniacs, Freakazoid!, Pinky and the Brain, and some lesser known works, such as Histeria!note an educational sketch show parodying historical figures and events — and pushing the limits of what can and can't be done on kids' TV, just like Animaniacs, Toonsylvania (one of his first animated projects when he created DreamWorks Studios), and the much-reviled Pinky and the Brain spinoff Pinky, Elmyra & the Brain.

On top of everything else, he has also worked extensively with the Universal Studios parks as a creative consultant. He helped oversee the development of both Universal Studios Florida and Islands of Adventure, as well as many attractions; including E.T. Adventure note which he also appears in As Himself, JAWS, Kongfrontation, Back to the Future: The Ride, Jurassic Park River Adventure, The Amazing Adventures of Spider-Man, Men in Black: Alien Attack, Transformers: The Ride, and so on.

Has said that his Oscar awards pale in comparison to the honor of being selected as a bearer of the Olympic Flag in the Salt Lake City games of 2002.

He has been married to Kate Capshaw since 1991, and was married to Amy Irving from 1985-1989. He has seven children: one son by Irving, two daughters and a son by Capshaw, an adopted son and daughter with Capshaw, and a stepdaughter from Capshaw's previous marriage.

In 2018 he became the first ever director to have his total worldwide box office cross $10 billion.

Works Spielberg has directed
Works he didn’t direct, but was involved in

Tropes associated with Spielberg and his filmography.