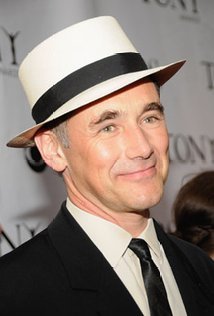 Sir David Mark Rylance (born 18 January 1960 in Ashford, England) is a British actor, theatre director, and playwright, generally regarded as one of the best theatre actors of his generation.

Born in Kent, Mark was raised in Wisconsin, where his parents taught at the University School of Milwaukee. Deciding early that he wanted to be a Shakespearean actor, Rylance attended the Royal Academy of Dramatic Arts, making a name for himself as a talented and versatile actor. He went on to make his professional debut with the Glasgow Citizens' Theatre, later joined the Royal Shakespeare Company, and served as the Artistic Director of Shakespeare's Globe Theatre from 1995 to 2005.

Of his theatrical performances, the most prominent are his Olivier-winning role as Benedick in Much Ado About Nothing, his Tony and Drama Desk Award-winning performance in Boeing-Boeing, and his role as Johnny Byron in Jerusalem, which won him his second Tony and Olivier awards for Best Actor.

Due to his focus on stage work and possibly his florid Large Ham style, Rylance's performances on screen were limited to small film and TV appearances, and usually in fringe productions for C4 and BBC2, at least until 2015, when he broke out in a big way: His performance in the BBC miniseries Wolf Hall was universally acclaimed, and he won an Oscar for his supporting performance in Bridge of Spies, the latter marking what seems to be the beginning of a very fruitful partnership with Steven Spielberg... the two of them are set to release one movie a year from 2015 to 2018. In 2017, he appeared in Christopher Nolan's war drama, Dunkirk and again in 2021's Don't Look Up.

He was awarded a knighthood in the New Year's Honours at the end of 2016.