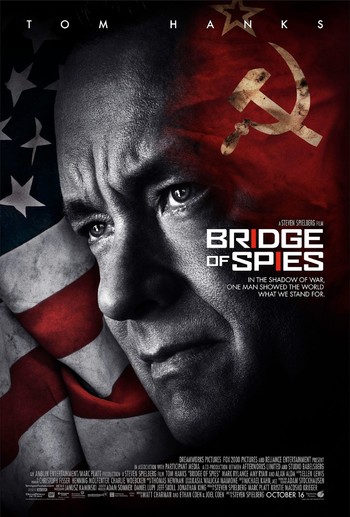 "What's the next move when you don't know what the game is?"
"The next mistake our countries make could be the last one. We need to have the conversation our governments can't."'
— James B. Donovan
Advertisement:

Bridge of Spies is a 2015 historical thriller directed by Steven Spielberg, with a screenplay co-written by Matt Charman and The Coen Brothers.

During the height of The Cold War, New York City insurance lawyer James B. Donovan (Tom Hanks) is approached to defend Rudolf Abel (Mark Rylance), a Soviet spy who has been arrested for espionage. Knowing full well that defending a Russian spy would bring negative publicity on himself and his family, Donovan nevertheless agrees to take the case, believing that everyone has the right to a fair defense. However, despite his efforts Abel is found guilty and sentenced to 30 years in prison.

But wait, there's more! A U-2 Spy plane is shot down over the USSR, and soon the Soviet Union has the American pilot Francis Gary Powers in their custody. Donovan is recruited once again, this time by the CIA to travel to East Berlin and negotiate a Prisoner Exchange, returning Abel to Russia in return for Powers being released into US custody. A wrinkle is added when the East Germans arrest an American student named Frederic Pryor during the confusion created by the construction of the Berlin Wall; The CIA doesn't want to jeopardize the exchange with the USSR for Powers by making it conditional on Pryor's release, but Donovan is determined to get both Americans back no matter what it takes.

The movie also stars Alan Alda, Amy Ryan, Peter McRobbie, Billy Magnussen, and Sebastian Koch. It was released in the U.S. on October 16, 2015. Thomas Newman is the composer, making this the first Spielberg movie since The Color Purple to not have a John Williams score.

Bridge of Spies contains examples of: