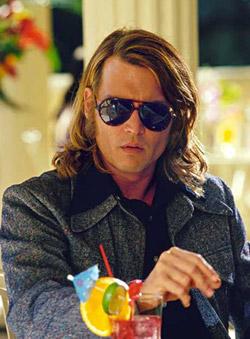 Blow is a 2001 Biopic about the life of George Jung

This film portrays the main events in George Jung's life. The film begins in the early 1950s, where George's father goes into bankruptcy, and George vows to himself that he will never be poor like his father. Next we see George move to Southern California, where he and his friend Tuna discover the profitable business of dealing marijuana. George goes on to delve deeper and deeper into the business of drug dealing, which results in great wealth, but disastrous consequences.

This film was written by David McKenna, and directed by the late Ted Demme.