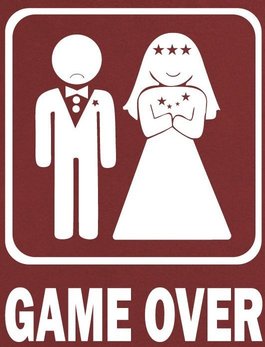 "Take it from me, Spaghetti Man, better dead than wed."
— Richie Tozier, It (1990)
Advertisement:

The depiction of monogamous marriage as rather like a long, slow, exquisite torture by a sadistic god from whose malicious clutches escape is impossible. Husbands are child-like buffoons who watch too much football, leave the toilet seat up, ogle hot women, and forget anniversaries. Wives are frigid, nagging, hateful shrews with zero interest in sex. Children destroy your home and what little peace of mind you have left, while waiting their turn to perpetuate the cycle. The in-laws only serve to add to the misery. The audience may be left wondering, "If they're so miserable, why don't they just get a divorce?"

Married... with Children was probably the first time this trope was the main focus of an American sitcom, but it's been a mainstay of British shows since The '50s. It is also a staple of Borscht Belt humour, but that may be less to do with venom than with Jews Love to Argue or Jewish Complaining.

The name, for those who don't get it, is a reference to the line "lawful wedded wife," from the traditional wedding vows.

Similar to No Accounting for Taste, but you'll rarely (if ever) see the Aw, Look! They Really Do Love Each Other moments occasionally found in that trope. Compare The Masochism Tango, Belligerent Sexual Tension, Like an Old Married Couple, Dead Sparks, and Married Too Young. Contrast Happily Married for the opposite and Happy Marriage Charade for when this trope pretends to be happily married.

Values Dissonance may apply. This trope is primarily found in eras or cultures where people marry young, divorce is impossible or highly scandalized, the couple felt forced to marry due to an unplanned pregnancy, and/or it was an Arranged Marriage with little regard to the spouses' individual tastes. Among younger viewers, jokes that rely on this trope are often derogatorily referred to as "Boomer Humor," owing to its common proliferation among people of older generations. Nowadays, someone who views marriage this way would simply not get married in the first place, even if they're romantically involved.

Example of:
Taking the Heat