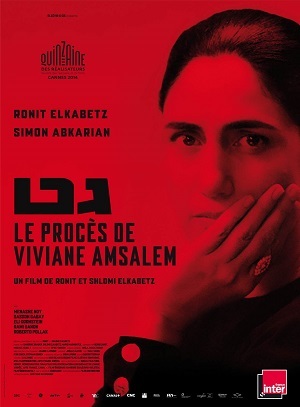 Gett: The Trial of Viviane Amsalem (French: Gett: Le procès de Viviane Amsalem, Hebrew: גט - המשפט של ויויאן אמסלם‎ Get — Ha'mishpat shel Vivian Amsalem) is a 2014 Israeli-French film directed by and starring Ronit Elkabetz, with her brother Shlomi Elkabetz as co-director. The cast includes Simon Abkarian, Menashe Noy and Sasson Gabai. It is the third film of a series focusing on the unhappy marriage of Viviane Amsalem, the first being To Take a Wife and the second Shivanote (named after the Jewish mourning custom

Viviane Amsalem (Elkabetz) has been married to her husband, Elisha (Abkarian), for over twenty years. She goes to a religious court, represented by Carmel ben-Tovim (Noy) in order to obtain a gett

as they are living apart and she no longer wants to be married to him. Represented by his brother Shim‘on (Gabai), Elisha refuses to give it to her and does everything in his power to stop her. The court of rabbis order a trial reunion for the couple which Viviane tries to comply with.

After several attempts to comply with the order the marital discord is so severe that she insists on a separation and a Kafka-esque divorce trial ensues. Over the course of several years, Viviane struggles to obtain divorce while her husband does his best to slow the process. Both bring witnesses to testify about each side’s righteousness, and the situation gets more and more complicated from there.