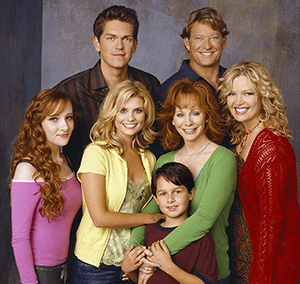 The cast. Clockwise from top left: Van, Brock, Barbra Jean, Reba, Jake, Cheyenne, and Kyra.
"My roots are planted in the past
Though my life is changin' fast
Who I am is who I wanna be
A single mom who works too hard
Who loves her kids and never stops
With gentle hands and the heart of a fighter
I'm a survivor!"
— The series' version of "I'm a Survivor", sung by Reba McEntire
Advertisement:

Reba Hart has to deal with her divorce from a cheating husband, her oldest daughter's teenage pregnancy and hasty marriage, and being a newly single parent to three kids, all the while cracking numerous jokes at the ex's new wife. Despite its slapstick premise, the show exhibited a surprising amount of genuinely touching emotion and edge.

Ignoring your own partiality (or lack thereof) to country music/culture, the show was popular enough to stay on the air for six seasons, even surviving the destruction of the network that originally aired it, and has remained in constant syndication for well over a decade.

Now has a characters page.