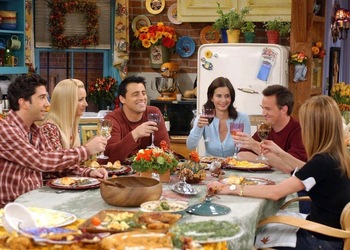 "I'll be there for fooooood..."
"The Americans have established a Thanksgiving Day to celebrate the fact that the Pilgrim Fathers reached America. The English might very well establish another Thanksgiving Day; to celebrate the happy fact that the Pilgrim Fathers left England."
— G. K. Chesterton, Sidelights (1932)
Advertisement:

A Thanksgiving Episode is a story or an episode within a larger series that focuses on the holiday of Thanksgiving, celebrated in the United States on the fourth Thursday of November (which may or may not be the last Thursday in November). Canada celebrates Thanksgiving as well, and in pretty much the same manner as Americans, with one of the main exceptions being that Canadians celebrate the holiday on the second Monday in October. Thanksgiving also exists on other dates in other countries.

Thanksgiving stories fall into two basic categories. The first category consists of stories that relate to the origin of the holiday. Traditionally, the holiday is dated back to a feast given in 1621 by Pilgrims of the Plymouth colony in Massachusetts to offer thanks to God for their survival past the first harsh year of the settlement. They invited the local Wampanoag tribe, who had been key to that survival, to share the feast with them—whence the familiar Thanksgiving iconography of steeple-crowned and bonneted Pilgrims alongside buckskin-clad Native Americans. Optimistic portrayals focus on the event as a time of inter-cultural cooperation and celebration. More cynical portrayals will place more emphasis on the long-term negative effect of European colonization in displacing the Native Americans.

The second category is stories that revolve around the celebration of the holiday in latter years. As with Christmas, Thanksgiving stories tend to be very family oriented, with characters either going to visit relatives or hosting large gatherings of the extended family. Such gatherings are generally intended to be joyous times of celebration, but can also be times of tension and internal family conflict. Often groups will take time to help those less fortunate than themselves.

The major focus of the holiday is on the Thanksgiving meal, which traditionally includes turkey, potatoes, pies, cranberry sauce, yams, and various vegetables. Preparing the turkey is a big deal, and an inexperienced cook seeking to prove themself by cooking a perfect meal will often find themselves making various amusing blunders. Even experienced cooks will find themselves challenged by the expectations placed upon them. Health minded cooks may try to create healthier alternatives to the traditional fare, which will almost certainly not be well received.

Other activities include the Macy's Thanksgiving Day Parade, watching marathons of TV shows, and watching or even playing American football. If the main character is a cartoonist, they might have the honor of their character being a balloon in the Macy's parade.

Thanksgiving stories will often muse on the true meaning of the holiday — family, thankfulness, thankfulness for family, etc. — by having characters enjoying each other's company despite stress, interpersonal conflicts, or inedible turkeys. Particularly likely to be the setting of Dinner and a Show.