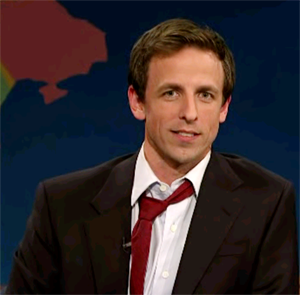 Seth Adam Meyers (born December 28, 1973) is an American comedian, writer, producer, actor, and television host who was Saturday Night Live's former head writer (2001–2014) and hosted the show's news parody segment, Weekend Update. Born in Evanston, Illinois and raised in Bedford, New Hampshire, he attended Northwestern University and joined the cast of SNL in 2001, making him the third longest-running cast member of all time (Kenan Thompson has been on the show since 2003 for a whopping 18 years on the show; and Darrell Hammond was on the show from 1995 to 2009, a whopping 14 years, then came back in 2014 to replace Don Pardo as the show announcer). He began co-anchoring Weekend Update in 2006 with Amy Poehler, and continued to do so even after Poehler's departure from the show in 2008.

Prior to being a Weekend Update anchor, Seth was just an ordinary SNL cast member who got his start during the 2001-2002 season (season 27; the season that saw the show [and America at large] trying to recover from the 9/11 attacks and the end of Will Ferrell's and Ana Gasteyer's respective runs on the show). Meyers' recurring characters included Nerod (the Appalachian Emergency Room receptionist who had to listen to how rednecks got injured — including repeat patient, Tylernote played by Chris Parnell who always comes in with an outrageous story of how he got something shoved up his butt), David Clinger (a doctor/scientist with an insult comic streak), Zach Ricky (the host of a hidden-camera prank show that always goes wrong when an older fan comes in with video evidence of murder), and Dan Needler (one half of "The Couple That Should Be Divorced.") and whose celebrity impressions included Andre Agassi, Ewan McGregor, Hugh Grant, Senator John Kerry, Peyton Manning, Brian Williams, Matt Lauer, and coincidentally, Anderson Cooper considering that in the final Weekend Update of the 38th season, Seth Meyers saved Bill Hader's Stefon character from marrying Anderson Cooper by beating Cooper up during the ceremony.

Has a younger brother named Josh Meyers (who looks like Seth,note especially in his eyes, his cheekbones, and his smile. Josh's voice also sounds like a lower-pitched version of Seth's except Josh is a redhead and is three years youngernote Josh Meyers was born in 1976), who was a cast member on SNL's former rival sketch show MADtv from season eight to season nine, then played Randy on the final season of That '70s Show.

He also has a series on Hulu called The Awesomes, and can be found on Twitter

. He is also one of the co-creators of the IFC show Documentary Now! where he also serves as a writer and executive producer.

He is married to Human Right Lawyer Alexi Ashe and they have three children.