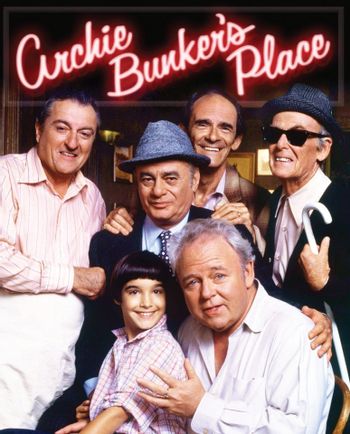 In which Archie Bunker gets to loudly voice his opinions at his bar instead of at home.

Archie Bunker's Place was a Work Com (with some Dramedy elements) and continuation of the classic sitcom All in the Family, which began airing on CBS in 1979. While never as popular or acclaimed as its predecessor, the show maintained a large enough audience to last four seasons, ending its run in 1983.

Following the previous series, Archie Bunker (Carroll O'Connor) and his wife Edith (Jean Stapleton) continued to nag each other and deal with Archie's very conservative views, all while attempting to raise their adopted grandniece, Stephanie (Danielle Brisebois), who was rapidly growing up. The major difference in this series was that most of the stories were set at the eponymous neighborhood tavern he'd purchased in the eighth-season premiere of AITF. The tavern was the place for him to sound off on current issues, get support from his friends, and argue with the bar's liberal, Jewish co-owner Murray Klein (Martin Balsam) and wisecracking cook Veronica Rooney (Anne Meara).

The series, like its predecessor, was set in the New York City borough of Queens. The opening and closing themes used re-scored instrumental versions of the songs from AITF.

Although not as well-regarded as the original series, Archie Bunker's Place still had a number of memorable moments. The show is probably best known for the heartbreaking second-season premiere "Archie Alone", which deals with the aftermath of Edith's offscreen death from a stroke (Stapleton having left the series midway through the first season, due to her belief that she'd done all she could with the character); the episode earned O'Connor two Emmy Awards for his performance, as well as the prestigious Peabody award.