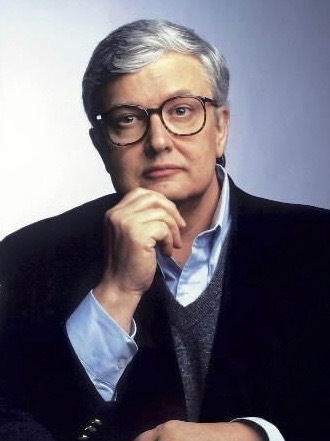 Deliberating whether his thumb should go up or down.
"As chance would have it, I have won the Pulitzer Prize, and so I am qualified. Speaking in my official capacity as a Pulitzer Prize winner, Mr. Schneider, your movie sucks."
— Roger Ebert on Deuce Bigalow: European Gigolo, a movie on his most hated film list.
Advertisement:

In 1975, Ebert teamed up with Gene Siskel, reviewer in chief at the Chicago Tribune, to present a film review program called Opening Soon at a Theater Near You, the great grandfather of the Video Review Show, on local PBS station WTTW. The program went to the full PBS network as Sneak Previews in 1978; in 1982 Siskel & Ebert moved to syndication on commercial stations across America, as a new but very similar program called At the Movies with Siskel and Ebert (or vice versa). Unexpectedly, this made Ebert one of the two most important movie critics in America. Because the show was televised, many more Americans saw it than read the reviews in the newspapers; because Ebert and Siskel had credentials in real newspapers in a major city first, and didn't review every movie favorably, they could be taken more seriously than most other movie reviewers on television. Films that received their signature "Two Thumbs Up" review (indicating that both of them liked it) got a reliable boost at the box office.

Siskel and Ebert's passive-aggressive chemistry was the stuff of legend. It was often thought that due to their occasionally hostile on-screen presence when they disagreed, that the two hated each other. However, each considered the other a close friend, even if their relationship was competitive by nature. In fact, in 2009 on the tenth anniversary of Siskel's death, Ebert posted a touching remembrance

of his friend on his blog.

When Siskel died in 1999, Ebert kept on the show with guest hosts until it was settled that it would be At the Movies with Ebert and Roeper, with Richard Roeper, another Chicago Sun-Times critic. This made him the most important living movie critic in America. The show ended in 2008 partially because his throat cancer was preventing him from doing most of the episodes for over a year and a half (to do film reviews on television, you obviously have to be able to speak). Sadly, due to a few surgeries that successfully eradicated his cancer, Ebert lost the ability to speak entirely and part of his lower jaw was removed. During the last few years of his life, he "spoke" through handwritten notes and a computer speech program. In 2010, a Scottish company created a voice similar to Ebert's own for him to use as his new "voice," using his DVD commentaries and other similar recordings.

In 2011, to replace the new At the Movies which had been canceled by its distributor, Ebert and his wife Chaz started their own movie review show on PBS called Ebert Presents at the Movies hosted by Christy Lemire of the Associated Press and Ignatiy Vishnevetsky of Mubi, which follows largely the same format as Ebert's other shows. Ebert himself appeared in a segment on the show called "Roger's Office" which features voice over narration (either with the help of either his new "voice," or a famous friend such as Werner Herzog or Bill Kurtis) of one of his recent reviews or musings. Ebert still wrote weekly review columns as well as a daily blog and maintained a very active Twitter account, where he was still an influential force in movie criticism's new dominant medium. His last cancer "treatments" had been such tough going through that he vowed that if the cancer re-emerged, he would let it take its course; this eventually transpired in 2013. His website continues to publish reviews, now written by a team of reviewers.

Ebert loved movies, and this was shown in his reviews. He was a fairly lenient criticnote On his Metacritic profile

, his average score for the 4,069 reviews that aggregator cites is around 71 percent, nearly twelve percentage points higher than the site's average. who liked a range of genres and was primarily concerned with whether or not a film was made with passion and craft. To him, even a "bad" movie was worthy of praise if those involved were sincere in their intent. Those who cynically ticked the necessary boxes earned his scorn. Doubly so if they did a bad job ticking those boxes. He also tended to rate films compared to others of their genre, not "overall"; Superman, for example, was pretty much the best superhero film going, but it was not on the same level as, for example, The Godfather. Any subsequent superhero film would, at some level, be compared to Superman, and so on.

His wrath, when deployed, was legendary. He published three compilations of bad reviews: I Hated, Hated, HATED This Movie! (reviews published in 1999 and earlier), Your Movie Sucks (reviews published from 2000-2006) and A Horrible Experience of Unbearable Length (reviews published from 2006-2011). He printed annual compilations of his movie reviews from The '80s onward, and wrote three books of essays about his favorite movies entitled The Great Movies. These essays are also available on his website in a condensed form. He also wrote Ebert's Glossary of Movie Terms, Ebert's Little Movie Glossary and Ebert's Bigger Little Movie Glossary, which are books of Film Tropes in The Devil's Dictionary form. (An even bigger movie glossary is on his web page.) They could be considered a proto TV Tropes in a sense (and the Trope Namer for many).

He also maintained a column called The Movie Answer-Man, where he addressed various topics given to him by reader comments. Sometimes addressing fandom aspects like...

He was one of the great proponents of film preservation, letterboxing (back when most televisions were square and most movies in theaters weren't), and giving credit to directors and screenwriters; he probably helped make these issues important. Also a proponent of seeing films in theaters, but he accepted modern viewing habits enough to write DVD reviews. He did a few audio commentaries notably ones for two of his all-time favorite films, Citizen Kane and Dark City, which have appeared on most releases of those films on DVD. He was also a master at uncovering the Freeze-Frame Bonus — for years, he would spend a week at the University of Colorado's World Affairs Conference dissecting a film frame-by-frame with an audience's help to reveal small details.

He was one of the major opponents to Colorization. He often liked Deliberately Monochrome films, and ones that were monochrome because of when they were made, because of the light and shadow effects. Ebert also protested censorship in the name of Avoid the Dreaded G Rating or avoiding the dreaded X/NC-17 rating. He advocated for years for a properly trademarked A rating to replace X since that sounds more respectable, and basically called out the MPAA for trying to enforce American morality from behind the veneer of arbitrary letterings. (He'd hoped NC-17 would become a respectable alternative, and was disappointed when it didn't, thanks in no small part to the failure of Showgirls.) He was critical of what he saw as an overuse of 3D technology in movies, though this was more because of how dim he felt the picture ended up in that format than because of the "gimmickiness" of it.

He was screenwriter for a Cult Classic film, Beyond the Valley of the Dolls. Since that film was released in 1970, this hasn't affected his stature as a critic much. He made fun of it himself, but said he was proud of it regardless.

He gained a bit of flak from the gamer community when he declared video games not to be an art form,

but he eventually came around

and at least decided he's not in a position to judge them (although, despite popular opinion to the contrary, he had been known to play them). Despite that episode, he was considered as the most One of Us of major critics, as he admired Japanese animated film and had an incredible knowledge of science fiction, which was among his favorite genres. While he claimed ignorance to a lot of TV shows due to his heavy schedule of writing and watching films, he found time to become a fan of the WWE (having found a fascination with wrestling after viewing Beyond the Mat), South Park, and Avatar: The Last Airbender. (During their 1979 review of Star Trek: The Motion Picture, Gene suggested that he might not have cared about the characters since he wasn't a fan of the show. Roger said that he WAS a fan and he didn't care about them as presented in this film.) Heck, he even gave The Nostalgia Critic his due after seeing his tribute video to Siskel and him via a Twitter message (Nostalgia Critic creator Doug Walker was so thrilled, he printed and framed it). Ebert also had a fondness of other film analysis and criticism, such as Tim Dirk's Filmsite.org (which Ebert frequently quoted) and RedLetterMedia; of the Revenge of the Sith review, Ebert stated: "I was pretty much sure I didn't have it with me to endure another review of [Revenge of the Sith.] Mr. Plinkett demonstrates to me that I was mistaken." This is especially interesting considering that said review criticized critics, specifically naming Ebert, who gave a free pass to George Lucas based on prior successes and not his recent output of work.

All his reviews are available on his website. The website of his 2011 show can be found here

and there's an archive of the old Siskel & Ebert episodes here.

His own life was brought to the screen in the 2014 documentary Life Itself.

Ebert's final public statement, in a blog post titled "A leave of presence,

"...And until next time, the balcony is closed."